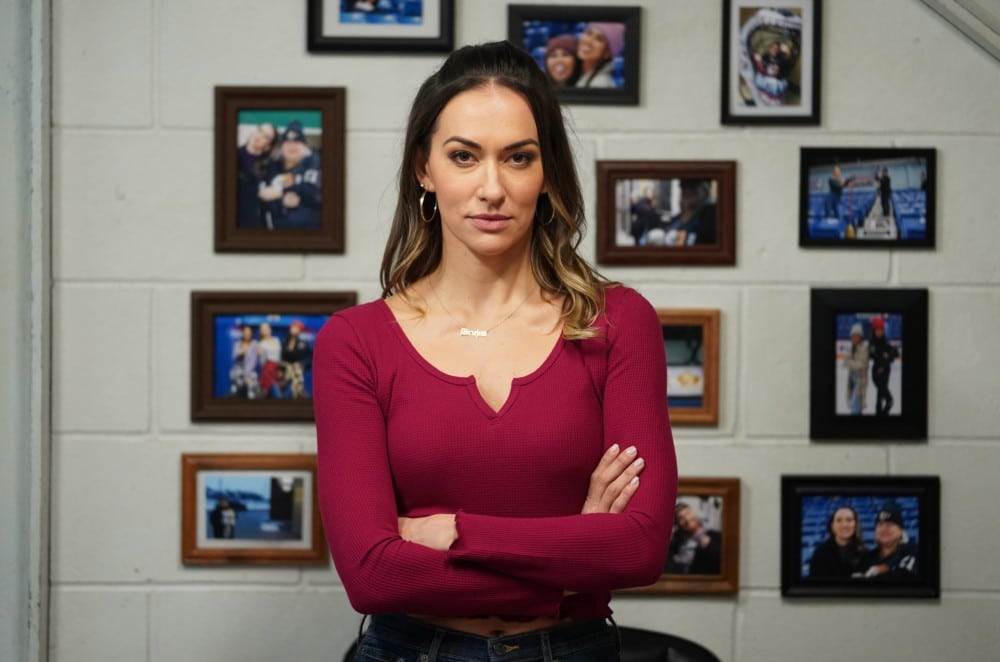 We were thrilled to chat with Tasya Teles of Shoresy one recent morning from the Crave offices in Downtown Toronto. We’d been on a collision course to speak with the Brazilian-Canadian actress and part restaurant owner Tasya Teles for a while now. First it was going to be for The CW series The 100, in which Teles starred as Echo beginning in season five (after guesting and recurring for a number of seasons), and then it was actually going to be for this series, Shoresy. We were thrilled to hear from the multi-talented Teles about the Jared Keeso created series, which is directed by Jacob Tierney. The hilarious show, a spinoff of the popular series Letterkenny, also starring Keeso in a lead role, here focuses on his character of Shoresy, a hockey player previously seen only with his face obscured. In Shoresy, though, Keeso can be plainly seen. And so too can Teles as Nat, the no-nonsense manager of the Sudbury Bulldogs of Northern Ontario. If the role seems in a way similar to that of Tanis on Letterkenny, it is not surprising to discover that Tiio Horn, her portrayer, is a consulting producer on Shoresy. And indeed, it is a female-forward series, which is a point that is definitely brought up a number of times by our interview subject, the more than gracious Teles. As well, she discusses what an immersion she received into comedy, constantly praising her cast mate and creator Keeso as well as Tierney for the sense of rhythm that they had perfected on Letterkenny and bring to Shoresy as well. Teles is also a proponent of self-care and makes a point to discuss her journey with the practice in a candid fashion. Overall, she is a badass warrior and definitely brings a sense of fun and energy to the proceedings.

Click below to see more of Tasya Teles of Shoresy:

All episodes of Shoresy are now available to watch on Crave in Canada. All episodes drop on May 27 on Hulu in the U.S.