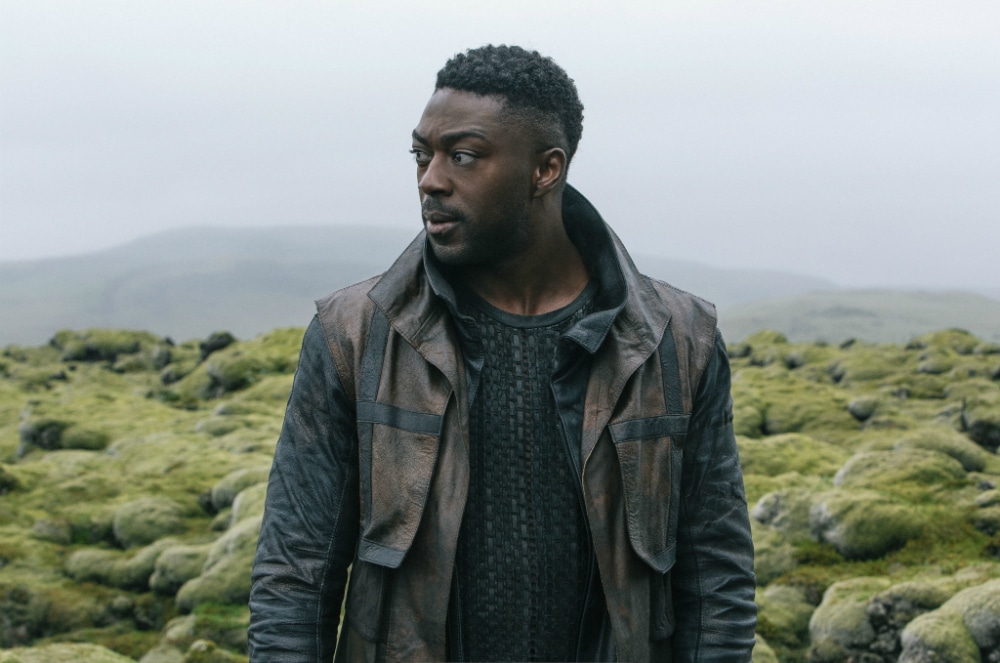 It’s a well known fact that David Ajala is a brilliant actor on stage and screen, but perhaps lesser known is how down-to-Earth and lovely he is as a person. When I first had the opportunity to chat with him, as part of an international roundtable at the Star Trek: Discovery press junket day this past January (before the world essentially shut down), he strolled into the hotel meeting room and asked each member of the press to introduce themselves as well as state which part of the world they were from. After each journalist followed his instructions, Ajala ensured that everyone (himself included) clapped for each person and addressed them by name. It was a rainy, cold day in January (in downtown Toronto, Canada) and yet the English born actor made us all feel warm and validated (which, let me tell you, is super rare at press junkets, which often feel impersonal and isolating). Months later, in October, when I had the wonderful opportunity to speak with him one-on-one, Ajala asked me how I was coping with the pandemic and then made certain that his picture quality and sound were to my satisfaction before I started recording our Zoom video chat. To be honest, I’ll never, ever forget Ajala’s warm-hearted gestures of kindness and goodwill.

The following are excerpts from the international press roundtable with David Ajala at the Star Trek: Discovery season three junket, followed by my video interview.

David Ajala: You know, honestly, I think I’d been a bit flippant and naive. Honestly. [laughs] I remember speaking with Alex Kurtzman and Michelle Paradise, the co-showrunners of  Star Trek: Discovery, and we spoke on the phone early last year about potentially working on this show. And I knew a bit about Star Trek, so I was already interested because of the stories that were told. Look, this franchise has been part of the culture for north of fifty years and they’re still going and they’re still relevant, so I was happy to take that phone call. And I remember speaking with them and they pitched this idea, and I’m all about character, and I thought this character sounds amazing. Cut to we’re at the San Diego Comic-Con. [laughs] We’re backstage, waiting to go on stage and be introduced to seven thousand fans, and then Sonequa Martin-Green, she looks at me and she says “David, there are 7000 people out there waiting to see us and to be introduced to you and welcome you to the franchise.” And then we step onto the stage and I didn’t just see 7000 fans, I saw 7000 fans with such enthusiasm and great energy. Cut to again we’re walking the floor and we’re meeting some of these fans, we’re doing meet and greets, and they’re sharing some of their personal stories and why this franchise is so important to them, and now we’re here. And this crystallizes, for me, the responsibility we have to take this heirloom, to elevate it, and share these stories. I’m so happy I said yes to working on this and I’ll brace myself for the fandom that comes with it, because I was a bit naive to that. [laughs] 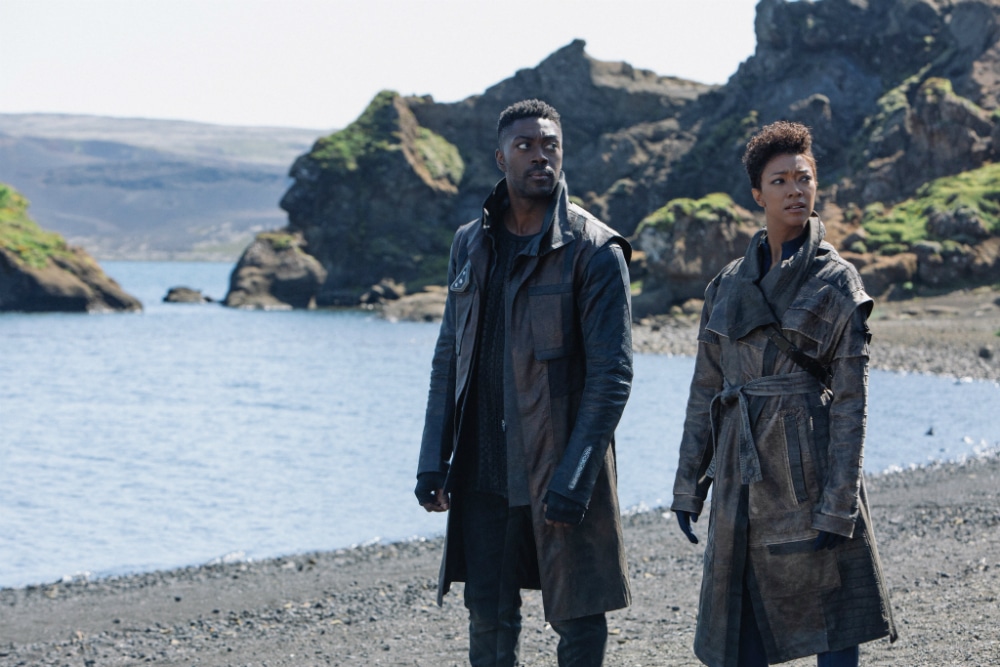 You mentioned that you met some of the fans at Comic-Con and heard their personal stories in how they deeply connected with Star Trek. What were some of the stories that have stayed with you?

DA: There was this lady that really connected with the character of Tilly, played by Mary Wiseman, and this lady suffers from social anxiety. She was saying that she’s been a Star Trek fan for many years, she was in her forties, and was a fan for many, many years but for the first time, she felt a sense of healing seeing herself on screen. And ah, I don’t think there was a dry eye in that auditorium when she told her story, it was so touching. And then after we were done our Q&A, her and Mary Wiseman had a moment when they were speaking and I captured it on my phone, a little photo, I was the paparazzi, and every now and then, when I may be tired on set after doing 15 hours or doing stunts and training, I just look at that photo and it centres me again.

What was it like filming in Iceland with Sonequa?

DA: Aww that was fun! It was intense because it was half our crew here in Toronto and then the other half of the crew was the Icelandic crew and they’re all meeting for the first time and having to build a working relationship that can withstand the terrain and the long hours. And I am too meeting Sonequa for the first time, so it was a weird kind of synergy but somehow it came together in a most wonderful, wonderful way. Iceland is beautiful and it’s otherworldly and on screen, I’ve seen some of the things we managed to do and they put it together, and it’s not even polished, [laughs], it’s not even polished and it looks fantastic. I’ve been told that they still have fifty per cent of the work still left to be done before they complete it. 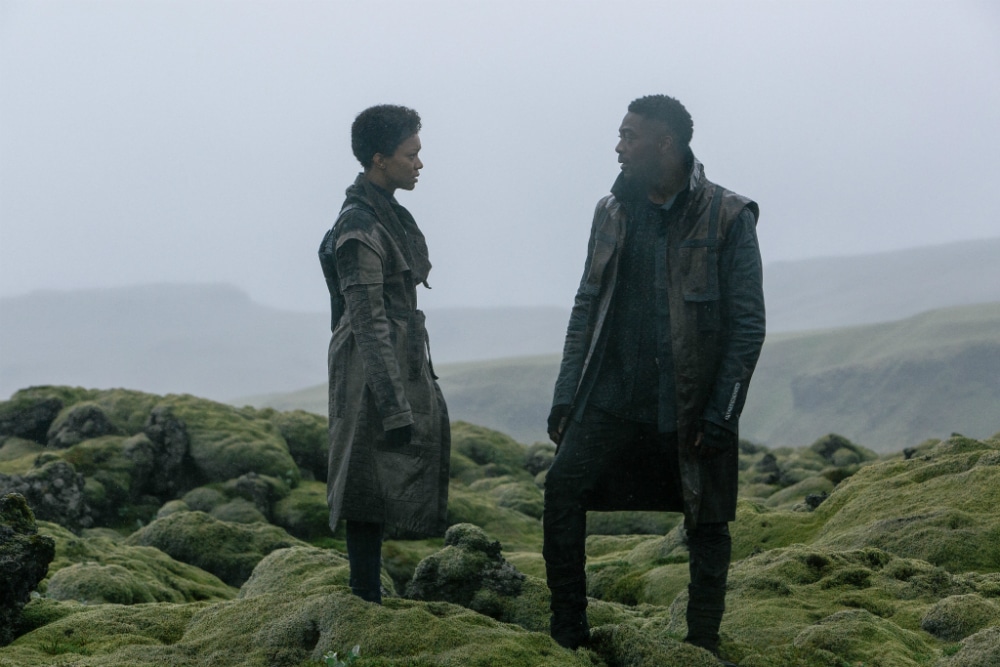 What was your squee, ‘I can’t believe I’m on Star Trek: Discovery‘ moment on set?

DA: Oh I call it a wee moment because I”m pretty sure I had a few moments where I wee’d a tiny bit from excitement. It’s the truth. It is what it is, [laughs] and it happened. One of them was in Iceland and ooh, I can say this one. It was fighting an Orion, that was fun. I was looking at its big ugly face and thinking “goodness”, that was a great moment. Another moment was using the phaser, and then stepping onto the bridge, that was another great “oh wow, this just got very real.” The crew know when I have my moments. Like yeah, that was a little wee moment – they know it. Fortunately, the wee doesn’t come out now. I’ve developed some callouses now. Here’s a little story. At Comic-Con, when we stepped out on stage, in the suit I was wearing, I didn’t wee because that suit would have given me away. [laughs] It was a light blue suit so that would have been very embarrassing. But I was about to step out on stage, and this was so embarrassing, the “live long and prosper Vulcan sign”, now I can do it, but I almost fucked it up. It was Ethan Peck, he was next to me, and I was like “aww yeah, I’m going to do the sign”, and I went like that [makes a non Vulcan sign with his hand], and he was like “dude, no”, and he rescued me! I would have gone on stage and introduced myself to this crowd doing it incorrectly. I can’t express how grateful I am that Ethan Peck helped me out in that moment. That would have been so clumsy, and I would have done it with the biggest smile. [laughs]