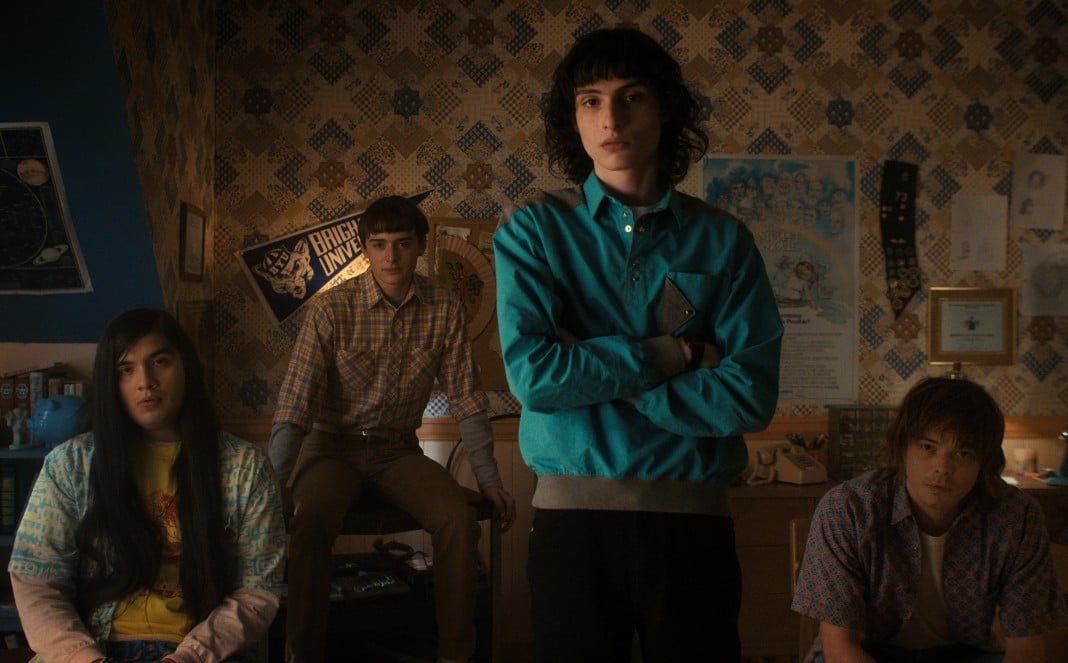 We can almost hear the music playing in the background, the pounding analog bass synthesizers, da da da da, da da da da, during our video junket interview with the California crew, the boys who are now based in California in season four of Stranger Things – Charlie Heaton, Noah Schnapp and Eduardo Franco. Of course, we know that the Canadian-American Schnapp plays the no longer trapped in the Upside Down Will Byers, the son of Winona Ryder’s Joyce, who manifests the trauma from previous seasons into a conflicting friend separation with long-time buddy Mike Wheeler. Untethered to his long time BFF, Byers and elder brother Jonathan (Heaton) have in season three tried to establish their lives out west along with Eleven (Millie Bobby Brown) and try living a quiet life in California sheltering her. And who is Eduardo Franco, you might ask? Well, the hirsute star of Booksmart and the Netflix movie The Package plays a pizza place employee and stoner with the interesting name of Argyle who also goes to school with Heaton’s Jonathan. Watch out for the end of episode four, in which the three are forced to band together, along with Will’s estranged pal Mike (Finn Wolfhard).

When we spoke with the tripled Heaton, Schnapp and gregarious Franco, we asked about a really funny dinner scene that found Brett Gelman’s Murray making his signature risotto, while the two of these three were stoned. In addition, Franco was shocked that we had watched the first four episodes of season 4: volume 1 as he had yet to watch any of them himself.

Catch even more of their hilarious interchange below: