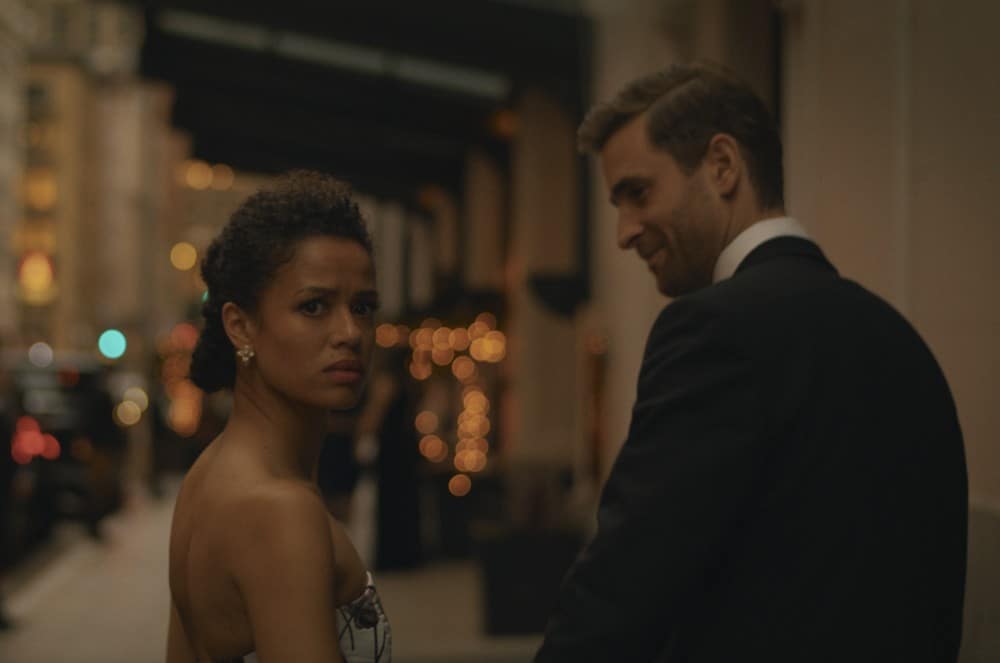 We have long admired and even revered Gugu Mbatha-Raw (she is a UN Goodwill Ambassador, how could we not?!), but strangely enough we had yet to have the pleasure of speaking with the talented multi-hyphenate, who is now executive producing her first ever project, the show for which we happen to be interviewing her for, the suspenseful Apple TV+ thriller in which she also stars, the twisty Surface. Of course, we have admired her recent diverse work as well, which includes her award-worthy performance in The Morning Show on Apple TV+, as well as in Loki, and another very recent thriller, The Girl Before.

During our junket video interview, Mbatha-Raw was paired with her co-star, fellow U.K. performer Oliver Jackson-Cohen, who we spoke previously for his shocking performance in Mike Flanagan’s The Haunting of Hill House. Of course we had to tell him that we loved his haunting performance in Maggie Gyllenhaal’s The Lost Daughter. Speaking of female-driven projects, the work that both of these talented stars are doing in the Hello Sunshine-produced and female-led Surface is astounding. Oliver Jackson-Cohen is quietly menacing as James, Sophie (Mbatha-Raw)’s controlling husband. After Sophie wakes up from a coma, she finds that her perfect life wasn’t what she thought it was and that the suspicion for her near drowning immediately goes to her husband as well as to her best friend (in a surprising dramatic turn from comedian Ari Graynor). We highly recommend that you sit down, perhaps with a glass of wine, and watch Surface with a loved one, but aim to not be too suspicious of them at every twist and turn.

See more of the vivacious Gugu Mbatha-Raw and Oliver Jackson-Cohen below:


New episodes of Surface are released every Friday on Apple TV+

brieftake
•
Follow
If you love P-VALLEY as much as we do (how is season 2 already over?!), click on the link in our bio for our exclusive video interviews with the incredible Nicco Annan (Uncle Clifford), Shannon Thornton (Keyshawn), Elarica Johnson (Hailey) and Brandee Evans (Mercedes). Some of our most candid, insightful and intelligent video interviews EVER. We can’t wait for season 3! In this clip from our interview with Nicco Annan, he offers sage advice for up-and-coming actors and relates it to his years of perfecting Uncle Clifford. . . . . . . . . #pvalley #pvalleystarz #pvalleyseason2 #niccoannan #uncleclifford #chucalissa #katorihall #shannonthornton #keyshawn #elaricajohnson #autumnnight #hailey #brandeeevans #mercedes #unclecliffordrules #unclecliffordandmercedes #lgbt #representation #advice #starz #crave #actors #interview #brieftake
View on Instagram |
2/9

brieftake
•
Follow
Every year we look forward to a new season of Netflix’s NEVER HAVE I EVER, and every year we look forward to a new video interview with the thoughtful & intelligent Jaren Lewison (aka Ben Gross on the popular series). In this clip from his fun & insightful interview with our @charlestrapunski, Jaren talks about Ben and Devi (Maitreyi Ramakrishnan). Bevi forever ❤️Team Ben! Head on over to our YouTube channel to watch the full exclusive video interview. 👀 . . . . . . . . . #jarenlewison #neverhaveiever #neverhaveievernetflix #neverhaveieverseason3 #neverhaveieverseason4 #bevi #benanddevi #benanddevi4ever #teamben #endgame #bengross #nhie #cliffhanger #netflix #netflixseries #netflixoriginal #interview #maitreyiramakrishnan #darrenbarnet #mindykaling #langfisher #popular #trending #watchthis #actor #talented #brieftake #exclusive
View on Instagram |
3/9

brieftake
•
Follow
It’s finally here! PRETTY LITTLE LIARS: ORIGINAL SIN begins tod🅰️y and we had the pleasure of chatting with the multi-talented Zaria (who plays Faran Bryant). Click the link in our bio for more from our in-depth video interview with the delightful Zaria! And stay tuned for our next video interview with another one of the “Liars” coming up next week 😉 . . . . . . . . #plloriginalsin #pll #prettylittleliars #prettylittleliarsoriginalsin #pllonmax #pllos #pllforever #pllcast #pllfamily #zaria #faran #faranbryant #ballet #balletdancer #interview #video #fun #thursday #pllfan #pllfandom #pllfans #new #brieftake
View on Instagram |
5/9

brieftake
•
Follow
Long before she was making PB&J sandwiches with Maya Hawke (as Vickie & Robin, respectively) on STRANGER THINGS 4 VOL. 2, Amybeth McNulty revealed to us that STRANGER THINGS was one of her favourite shows. We love this journey for her!! Link in bio for more of our way back throwback video interviews with the stars of ANNE WITH AN E (another Netflix favourite). . . . . . . . . . #strangerthings #strangerthings4 #amybethmcnulty #annewithane #renewannewithane #reneweverythingsucks #vickie #robin #robinbuckley #mayahawke #robinandvickie #strangerthingsseason4 #strangerthings4volume2 #throwback #throwbackmonday #fourthofjuly #actress #dalilabella #kylamatthews #anneshirley #netflix #netflixseries #cbc #fanday #talent #interview #brieftake
View on Instagram |
7/9