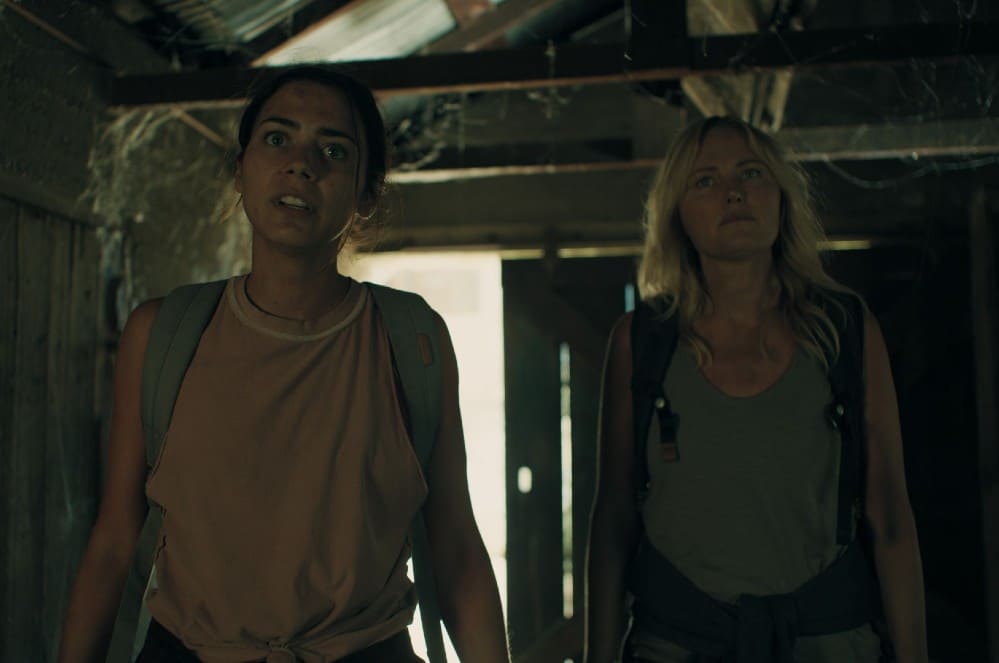 Please don’t hesitate on the movie The Aviary, which is being released this weekend by Saban Films. We are not simply sharing this opinion because we spoke with the two bubbly leads of the film, Swedish-American Malin Akerman and Colombian Lorenza Izzo, who were as fascinated with each other as Brief Take was with these bewitching actresses. In fact, this was actually the second time that we had spoken with Malin Akerman on Zoom video, as the previous time was for the altogether different movie The Sleepover, which was released by Netflix in August 2020. And fun fact, we had come fairly close to interviewing Izzo previously, but we were delighted that the first time was paired with Akerman for this particular title. On to The Aviary, despite the way that we have been describing the film so far and seeing the smiling faces, this movie is actually quite dark. Two women (Akerman and Izzo) run away into the New Mexico desert to get away from an insidious cult that is known as Skylight. As a result, The Aviary (and the bird-confined suggested title is definitely not lost on us). As well, the charismatic and sinister cult leader that the pair, Jillian and Blair, are on the run from happens to be the charming Chris Messina. We know that he’s a nice guy in real life though because Akerman singles him out as a co-star with whom she would work again in a second, but he’s eminently scary in this film and a big change of pace from roles such as Dr. C in The Mindy Project. The film becomes something more of an escape movie than anything else, but once supplies start running low in the desert and the memory of the Skylight cult and its leader Seth start to reappear, we wonder if this breakout is going to last. And of course, we were impressed by how this Chris Cullari and Jennifer Raite movie was extremely female-forward, and more than that, it’s quite dissimilar from the women in peril type of movie that we have come to know in this genre. We also got the inside track that Akerman has met recently with author Lisa Taddeo and was set to tell Izzo all about it. But for now, fly on over to The Aviary and watch more with the awesome Malin Akerman and illustrious Lorenza Izzo.

The Aviary opens in theatres and is available on Digital & On Demand on Friday, April 29!