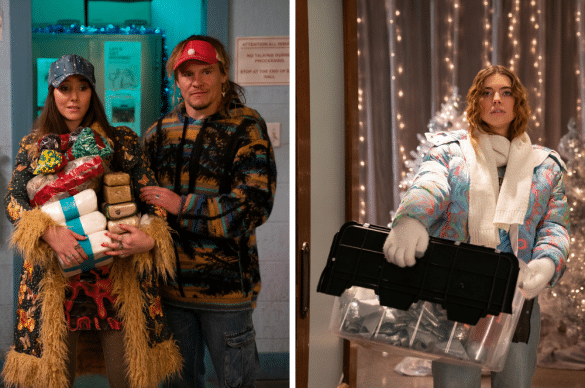 Brief Take received the pretty cool opportunity on a recent press day to sit down with The Binge 2: It’s A Wonderful Binge rising stars Patty Guggenheim and Marta Piekarz. This was a first time appearance for Guggenheim in the Binge franchise to star as the hilarious character of Delray Donna. As she was our final interview during said press day, after partying hard the day before at the premiere, Patty Guggenheim ruminated with Brief Take about improvising a lot of her lines with her pal, co-star Tony Cavalero, who once more plays audience fave Pompano Mike. Guggenheim as well gushed over writer-director Jordan VanDina, who wrote the first Binge movie, and here, makes his directorial debut in The Binge 2: It’s a Wonderful Binge, in addition to writing the movie. Patty Guggenheim also revealed her Mom’s surprising obsession with The Binge, which started before her own daughter joined the franchise (we hope that Mom enjoyed the Christmas-themed sequel as much!). When asked about the last thing that she’d binged, Guggenheim revealed how she wasn’t very into The Crown‘s recent season five, but that she really enjoyed the series Wednesday on Netflix. Guggenheim also opened up about how much she loves hearing fan reactions to her extremely popular performance as Madisynn in the Marvel series She-Hulk: Attorney at Law.

As mentioned, Hulu’s The Binge 2: It’s A Wonderful Binge star Marta Piekarz also  talked with Brief Take about the experience of returning to Syracuse to film in a role in the must-see Binge sequel. Piekarz revealed to us how she loved acting like she was on drugs in the movie, and detoured into imagining what colonial people would think about some of the crazier moments in The Binge 2: It’s a Wonderful Binge. Lastly, Piekarz reminisced about filming the 2022 Peacock series Queer as Folk, in which Piekarz played the character of Mercury.

Please click below to get your binge on for more with Guggenheim and Piekarz:

The Binge 2: It’s A Wonderful Binge is now available to watch on Hulu