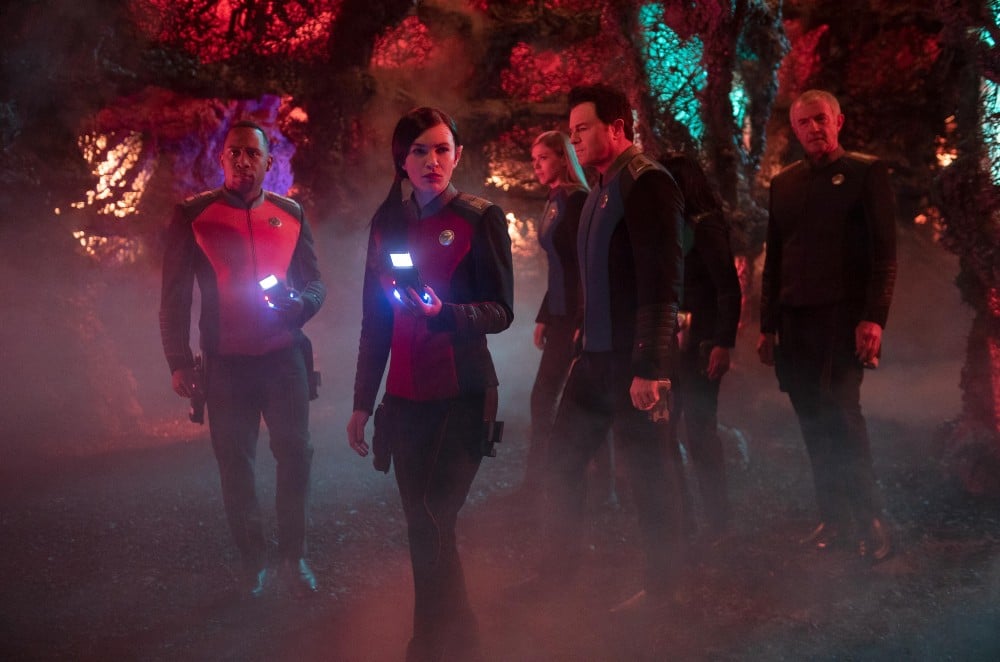 As I had been greatly anticipating season three of Seth MacFarlane’s superb sci fi series The Orville (which has a new home on Hulu and a new title for this year, The Orville: New Horizons), it was a bit of a new horizon in that the exclusive video junket showcased how the show is both extremely female-forward, but also collaborative, as almost everyone is welcome aboard The Orville. Adrianne Palicki and Penny Johnson Jerald were easily the kindest experience of the day, as the pair took turns pronouncing my first name is an extremely royal-sounding way (mainly conducted off-camera), but even when the camera was rolling, the pair were beyond sweet, with Palicki discussing Rob Lowe’s previous guest-starring appearance on the series (there are more than a couple of famous guest stars that have appeared on the show), as well as pointing out the importance of Penny Johnson Jerald’s Doctor Claire Finn being a relatable single mother to two boys on the series. In turn, Penny Johnson Jerald talked about how Palicki’s Commander Kelly Grayson is a badass too, overcoming differences to be friendly with her ex on the show, MacFarlane’s Captain Ed Mercer (also, that she is very much into the tv show Ozark).

But wait, there’s more! Please do watch our perennial favourite Jessica Szohr who provides us with all the gossip on season three of The Orville: New Horizons. One of the ways that she does this is by pointing out that new addition to the series, and yet another favourite of ours, Anne Winters, has a complicated arc and exciting storyline as Ensign Charley Burke. As an added bonus, Szohr, who plays Xelayan Chief of Security Talia Keyali, exuberantly mentioned that she had gotten engaged (to hockey player Brad Richardson) and announced this happy fact the very morning that the junket took place.

Perhaps the room that we enjoyed the most overall on the entire junket was that of Chad L. Coleman’s Klyden, the mate and father of the child of Peter Macon’s Bortus, who also was present in the room. And, to ensure that this wasn’t entirely Moclans, there was also a Kaylon in the form of Mark Jackson, who portrays Isaac, the divisive science and engineering officer. Great vibes all around in this room, lots of reminiscing about working with each other (as well as about series creator Seth MacFarlane).

We were also extremely amused by the pairing of J. Lee (Lieutenant Commander John LaMarr) and Scott Grimes (Lieutenant Gordon Molloy), as both were bedecked in The Orville clothing from head to toe (seriously, I want to get some for myself!), and also were a joy in discussing each other’s contribution and how much fun and joking is done on set (between takes that are serious, of course).

And lastly, executive producers Brannon Braga, Jon Cassar, and David A. Goodman shared their favourite memories from all three seasons (and many of them unsurprisingly seemed to involve Bortus). Also, they teased an upcoming guest star that was a dream get, and we cannot wait to see that reveal.

In fact, we’ll be re-watching this entire upcoming season of The Orville: New Horizons especially after this delightful junket experience.


New episodes of The Orville: New Horizons are released Thursdays on Hulu