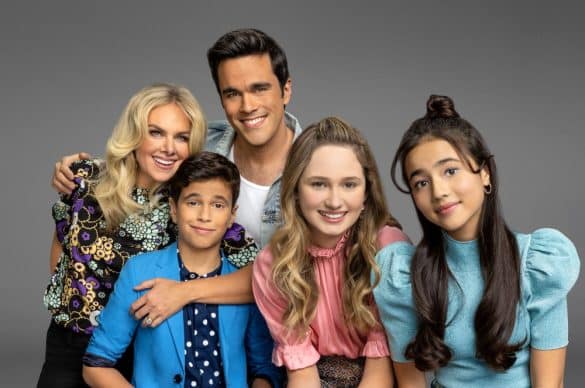 We were more than delighted to discover that Brief Take was invited to speak with three exceptional talent rooms, in support of the Paramount+ live-action/animated hybrid series The Fairly OddParents: Fairly Odder, which is an offshoot of the Nickelodeon series Fairly Oddparents.

From the start, the room that spoke to the inner theatre nerd in us was the virtual Zoom room consisting of a pair of performers from Hairspray: Laura Bell Bundy, who was of course the original Amber Von Tussle in the stage musical, (as well, Bundy originated the character of Elle Woods in the musical of Legally Blonde), and Garrett Clayton, who portrayed love interest of Tracy Turnblad, Link Larkin in Hairspray Live!. This mainly theatre room also featured Ryan-James Hatanaka, who originally hails from Toronto, (and appeared in, among other shows, The CW’s Nancy Drew). On The Fairly OddParents: Fairly Odder, Laura Bell Bundy and Ryan-James Hatanaka take on the roles of parents here, and we would certainly be jealous of any kid with cool parents like them. On the other hand, Clayton plays musical heartthrob Dustan Lumberlake, who may be based on an actor and former member of a boy band.

The room that ended up being the most animated, so to speak, was that of O.G. voice actors Susanne Blakeslee, who is the voice of Wanda, and Daran Norris, who embodies the voices of Cosmo as well as anti-hero Jorgen Von Strangle. Blakeslee and  Norris were a delight, but what else is to be expected from voiceover actors in their natural habitat of a recording booth?!

Finally, we delighted in the kids room of Audrey Grace Marshall, who plays Viv Turner, the daughter of Ryan-James Hatanaka’s Ty Turner, Tyler Wladis, the son of Laura Bell Bundy’s Rachel Raskin, and in a standout performance, Imogen Cohen embodies the Turners’ neighbour Zina Zacarias. Above all, look out for scenes involving Cohen, who is tremendous on the show. As well, please check out the live-action animation hybrid series of The Fairly OddParents: Fairly Odder through Paramount+ and check out even more fun below with all three talent rooms.

All episodes of The Fairly OddParents: Fairly Odder are now available on Paramount Plus!