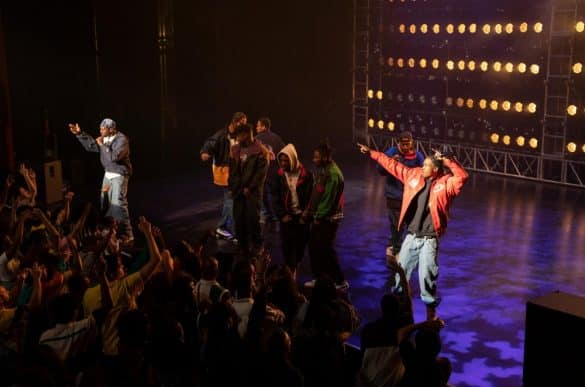 The press junket for the second season of the Hulu series Wu Tang Clan: An American Saga was an interesting exclusive experience because everyone we spoke with on this day of press (and in the series as well) brings their A game. The pairing that we perhaps most enjoyed was that of the pink haired Erika Alexander and fast rising star Zolee Griggs. Alexander and Griggs play family members of RZA (Ashton Sanders) in the series, his mother and sister. In real life, Bobby Diggs has 11 brothers and sisters, here portrayed as one character, Shurrie Diggs. A grouping with whom we also enjoyed speaking was Julian Elijah Martinez, Marcus Callender and Uyoata Udi. The three bring great energy as mainly the producers and associates of the Wu-Tang Clan, Divine and Power, respectively. Udi plays Inspectah Deck, replacing season one’s portrayer, Joey Bada$$. The pairing of Johnell Young and T.J. Atoms was absolute fire, which was probably what to expect from the portrayers of GZA and Ol’ Dirty Bastard, respectively. We tremendously enjoyed speaking to everyone and recommend watching season two of Wu Tang: An American Saga to catch all of their captivating performances.