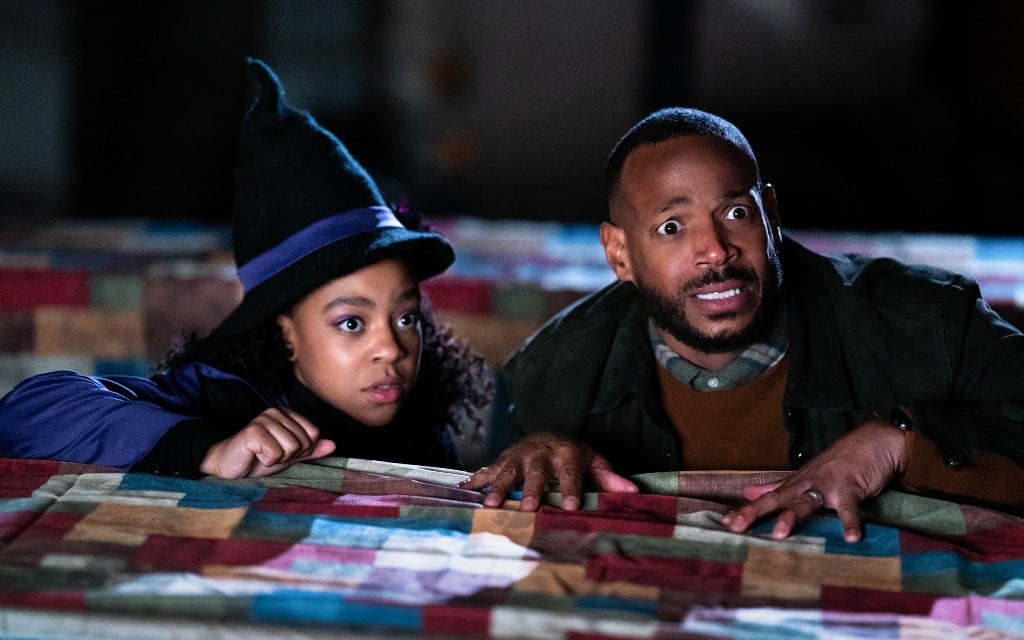 One of the more curious and fun interviews that we have experienced in a while was getting the chance to sit down with the  somewhat unpredictable yet hilarious Marlon Wayans and the always entertaining Priah Ferguson of the Netflix movie The Curse of Bridge Hollow, a family horror movie released just in time for Halloween. The synopsis of this warm-hearted film is that a happy-go-lucky family (played by Wayans, as father Howard Gordon, Destiny’s Child singer Kelly Rowland as mother Emily Gordon, yes there is a Beyoncé reference to watch out for, and daughter Sydney Gordon, played by fast rising star from Atlanta Priah Ferguson), move to the sleepy town of Bridge Hollow in New England from Brooklyn, New York. Rowland is a lawyer mother that makes cookies which taste like marbles, Wayans is a science teacher father that is scared of bones, and Ferguson is a 14 year-old girl that is sort of the outlier, as she is into ghosts and Halloween, and they all find themselves in a town that religiously celebrates Halloween, which allows star supporting players, such as Lauren Lapkus as the town Mayor, to shine.

The Curse of Bridge Hollow stars Marlon Wayans and Priah Ferguson recently chatted on the junket day with Brief Take on the junket for the Jeff Wadlow-directed movie. I heard about how Wayans made Ferguson crack up constantly on the set, they shared with me their favourite scenes from the film and whether or not they celebrated Halloween growing up (we were surprised by the answer). Lastly, Ferguson shared some of her experiences with the Stranger Things fandom, as she is extremely beloved as the no-nonsense Erica Sinclair on the popular Netflix series. Wayans, who made reference to being interviewed as if he was in a library (?) shared that the White Chicks fandom has endured and fans continue to dress as the characters created by Marlon and his brother Shawn Wayans.


The Curse of Bridge Hollow is available to stream on Netflix tomorrow!