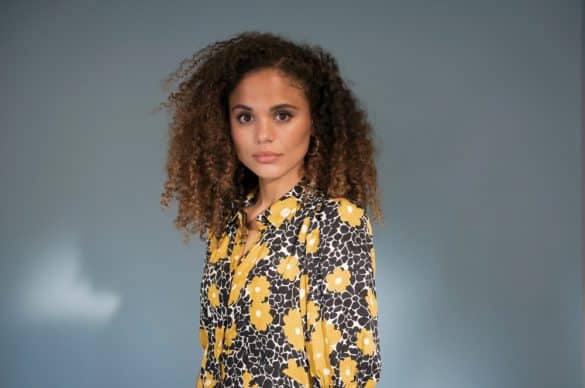 Bubbly and energetic actress Jessica Plummer is quite the force of nature in the HBO Max miniseries The Girl Before (seriously, her performance is riveting). Plummer also happens to be quite the standout interview subject, which Brief Take discovered when we chatted with the performer via Zoom video from her house in London. When we spoke about the television adaptation of J.P. Delaney’s popular book The Girl Before, Plummer readily agrees that the advantage of the series is that it is a very small cast, with the main cast members, including Plummer (as Emma Matthews, the titular Girl Before of the show), as well as formidable Gugu Mbatha-Raw (who is also a producer of the series) and a bit of an outside the box performance by David Oyelowo (as Edward Monkford, architect of this fantastic minimalist house that needs to truly be seen to be believed). Rounding out the cast is the boyishly handsome Ben Hardy as Emma’s boyfriend, Simon, who moves into the ominous One Folgate Street along with Emma. Over the course of the twisty four-part miniseries, the character of Emma is the audience’s way into this incredible house and its secrets. Plummer is a wonderful guide, providing a bit of a tour for what we might discover within, such as how the performer is perpetually cold. Quite in contrast, Jessica Plummer is extremely warm in nature, providing incredible detail into how music influenced her process, as well as some songs that have lately been inspiring her (shout-out to the Encanto soundtrack!).