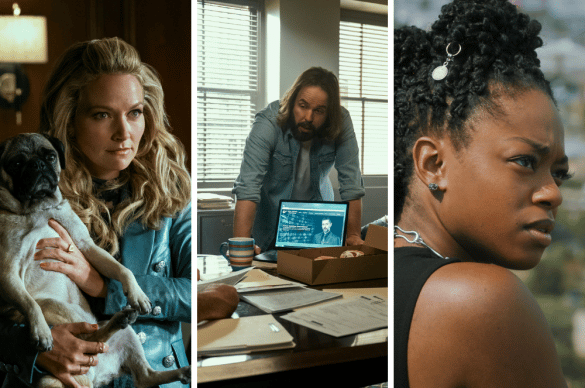 We were surprised about a number of things from the cast of The Lincoln Lawyer, the extremely buzzy new Netflix series based on the second book in the Mickey Haller series from author Michael Connelly (who acts as series writer and producer as well). The first thing is that Becki Newton, who on the show plays the character of Lorna Crain, the second wife of lead character Mickey Haller (played by Manuel Garcia-Rulfo), who is Haller’s legal aide but is more of a jack of all trades in the series, is extremely delightful. In our video interview, she discussed almost everything from the identity of her dog on the show to what it meant for her to reunite with her Ugly Betty cast mate Christopher Gorham, whom Newton notes is playing a bit of a different role here as a video game developer suspected of a double murder (though Gorham wasn’t a part of the junket, we had previously interviewed him for the Netflix series Insatiable). Newton was in fact so delightful that Aussie co-star Angus Sampson, who plays the hulking Cisco on the show, Mickey Haller’s private investigator and a former motorcycle gang member, was taken aback by the kindness of Newton (on the show she plays the fiancée of Cisco), that he gave an impromptu speech about how wonderful she was as a scene partner (which almost reduced Newton to tears). What surprised us most about the final member of our grouped video interview, Jazz Raycole, is that she cited a memorable scene that made her physically ill (it involved eating donuts over and over again, which actually doesn’t sound so bad to us to be totally honest). As well, we were generally surprised by how transformative Raycole is IRL from the character that she is playing, Izzy Letts, a former addict and the chauffeur of Mickey Haller. In fact, it was noted that many of their respective roles are in relation to the titular The Lincoln Lawyer, but it is clear how well each gets along with each other, which is always great to see in a show as much about relationships as it is about the law.

The Lincoln Lawyer is now streaming on Netflix