Interview: The Resort’s cast and creator 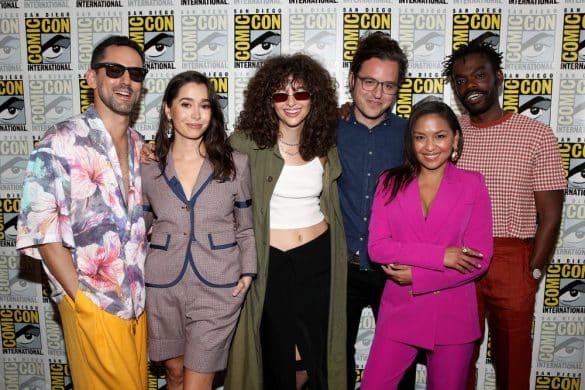 The Resort is a unique sort of show which explores the many forms of love and the weird things we do in the name of it. That is coupled with an elaborate true-crime conspiracy in the fantastic and far roaming and tough to classify summer series that is The Resort, a sort of amalgam of Andy Siara’s previous project Palm Springs, Ben Sinclair’s High Maintenance, and elements of producer Sam Esmail’s “out there” shows. The Resort stars William Jackson Harper (whom we know as Chidi from The Good Place) and Cristin Milioti (Tracy McConnell from How I Met Your Mother) as a married couple on vacation at a holiday resort for their 10th anniversary, where they’re drawn into a mystery that took place 15 years before. The fifteen years before is our entry point as on the exclusive junket for the Peacock series, I talked with stars Skyler Gisondo, who plays Sam, and Nina Bloomgarden, who plays Violet, two earlier guests at the hotel, as they gushed about their on-screen parents, who are played by real life couple Becky Ann Baker and Dylan Baker, as well as Nick Offerman. Gisondo and Bloomgarden revealed to me the reason they loved working together and discussed some of their favourite moments on the thrilling show.

The Resort‘s hotel staff stars, Luis Gerardo Méndez (who plays Baltasar Frías) and Gabriela Cartol (who plays Luna) also talked with Brief Take about their iconic dancing scene which took 10 hours to film, how the thespian pair have known each other since the days of their acting school, as well as why they want everyone to watch The Resort.

The Resort is now available to watch on Peacock in the U.S. and on Showcase in Canada