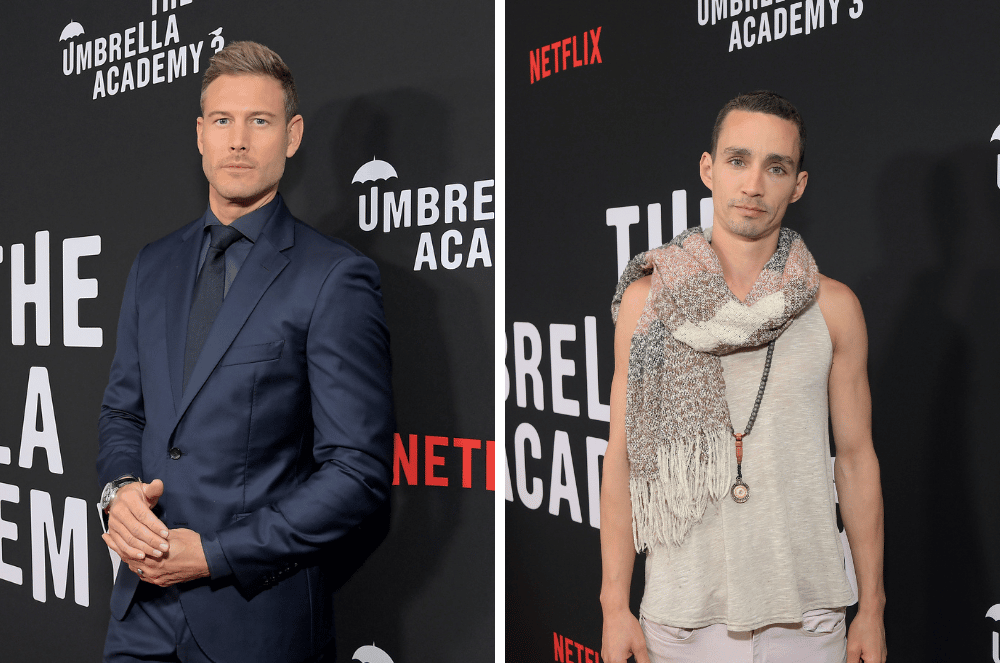 Despite this being my initial time interviewing the delightful pairing of Tom Hopper and Robert Sheehan of The Umbrella Academy (as well as show runner Steve Blackman), I was extremely familiar with their style and output. In the case of Tom Hopper and Robert Sheehan, after being welcomed to the Overlook Hotel by Sheehan (which is perhaps a nod to a central location used in the upcoming and highly anticipated season three of The Umbrella Academy), we noted that the brothers, Luther and Klaus, actually have a podcast together. But even more so, the English Hopper and Welsh Sheehan share a common element in that Hopper’s real life wife, Laura Hopper, despite being nearly the same age as the siblings, portrays the biological mother of Sheehan’s Klaus. The real life wife / fictional mother link isn’t the sole element that binds these two brothers, as we made note that Hopper brings back his infamous crab dance from season one, (remember ‘I Think We’re Alone Now’?) and just to show their closeness, Sheehan then performed a bit of the crab dance. Of course, this led into a discussion of Star Wars and Stormtroopers and how the pair bonded over doing virtual reality together and The Metaverse. We wouldn’t expect anything less from Hopper and Sheehan, as they revealed that they bring out the best in each other, shared more about the escape room that they visited in Toronto.

We also made sure to ask showrunner Steve Blackman about another brother in the Hargreeves family, that being Elliot Page, and how he managed to work his transition seamlessly into the already locked show, (Blackman cited Thomas Page McBee, a writer on The Umbrella Academy, as well as GLAAD as key to Viktor Hargreeves’ storyline). Finally, for Hopper and Sheehan, Luther and Klaus both go on separate but absolutely life (and perhaps even death)-changing arcs this season and you definitely would like to check in below before oblivion strikes.

The Umbrella Academy season three is now streaming on Netflix