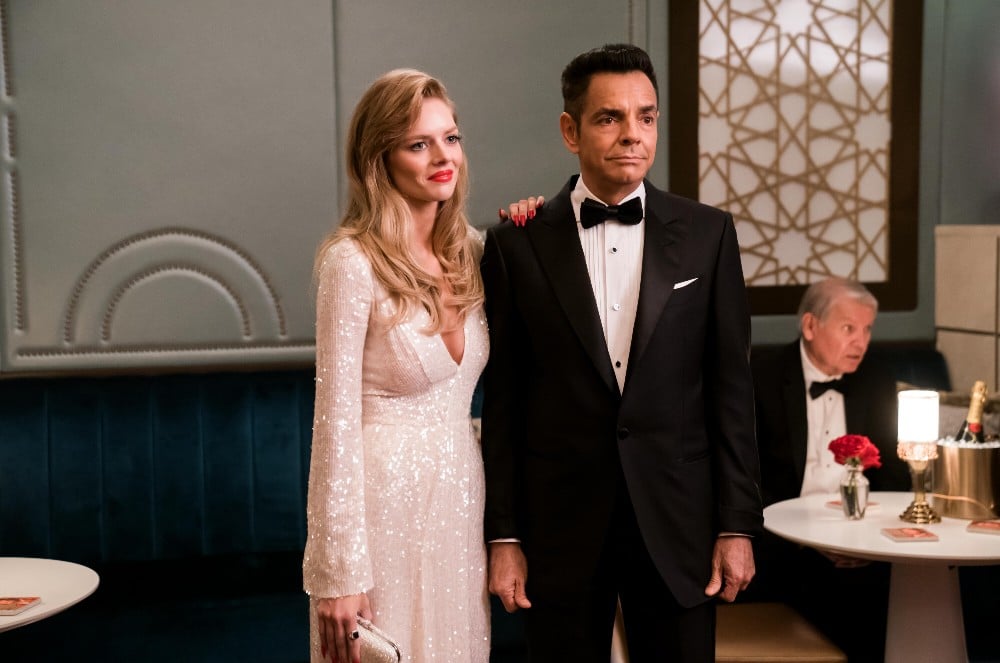 We have been passionate fans of Eugenio Derbez and Samara Weaving for a while now. Her, we enjoy from such diverse projects as the Toronto-shot darkly comedic family horror film Ready or Not, the Ryan Murphy show Hollywood, which like The Valet is a kind of insider-y take on the movie business, and the Hulu series Nine Perfect Strangers. Him, well, let’s just say that we were enthralled by his performance as music teacher Mr. V in the Best Picture winner CODA, (his CODA co-star Daniel Durant actually came out to the premiere of this film as well). We also very much appreciate how Derbez is doing more producing work, on Dora and the Lost City of Gold, Overboard, and for this film, the charming Hulu title The Valet. The film seems to at first be about a classic misunderstanding, as actress Olivia Allan’s (Weaving) illicit affair with married real estate tycoon Vincent Royce (New Girl‘s Max Greenfield) is caught by the paps in public, which would be extremely harmful to her carefully cultivated image. However, at the exact moment, the down on his luck divorced dad Antonio Flores (Derbez) happens to be driving by on his bicycle and crashes into Royce’s Uber driver’s car. Hoping to put a different spin on the story, it is decided that Olivia Allan and Antonio Flores will pose as a couple, thereby creating a new narrative for the paparazzi. Flores, who already has a gig parking cars in Los Angeles, instead becomes a different type of Valet, escorting Allan to her Hollywood premiere of an Amelia Earhart movie (and hilariously enjoying the many snacks that come free of charge) and also generally posing as a happy couple. However, when the movie shifts to show even more of the complex life of Flores, it quickly turns into a heartwarming and sweet comedy.

In our video interview with the talented pair, we very much enjoyed how Weaving and Derbez rave about each other and about how much fun it was to make The Valet. They shared with us some of their favourite scenes from the movie and their recent binge watches (Weaving has been watching another sort of Hollywood insider-y take on the movie industry, the Bill Hader comedy Barry, which we also highly recommend). Like many people, Derbez recently finished the devastating final season of Ozark on Netflix. For a change of pace film, we absolutely advise you to seek out and stream the winning The Valet.

The Valet is now available to watch on Hulu