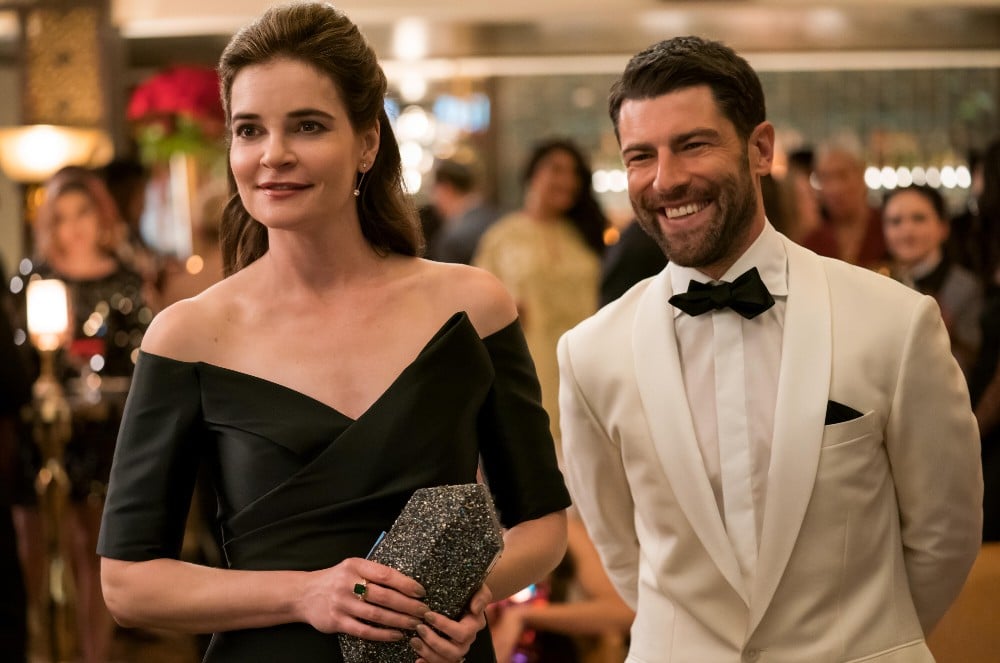 Look up the definition of a “pro” in the dictionary and we hope that you will find two of the stars of The Valet: Max Greenfield (who of course you know from New Girl, the CBS sitcom The Neighborhood, and, on the film side, Promising Young Woman and A Futile and Stupid Gesture), and Betsy Brandt (best known for her work on Breaking Bad as the oft purple-clad wife of Hank on Breaking Bad, but recently delivering a brilliant performance struggling with mental health as Dawn Westen, the mother of Felix in the Hulu / Disney+ series Love, Victor). As expected, both are standouts in The Valet, as well as in our fun video interview. Sure, Greenfield’s Vincent Royce is kind of a dirtbag in the movie, a fact that co-star Brandt brings up, but Greenfield provides a welcome presence with a comedy background. As well, Brandt, as put-upon wife Kathryn Royce, more than makes up for her occasional presence in the film by adding to each scene in which she appears. In the interview proper, the chemistry sings between the pair, as they constantly made each other laugh and sharing with each other (and with us too) some of the movies and shows on which they have recently been catching up. As well, they share their favourite moments together on screen and generally poke light fun at each other throughout, (especially on the subject of Greenfield’s casual wardrobe choice). Brandt, who happens to be in more of a scarlet this time, came dressed to the nines. Do check out Greenfield and Brandt in The Valet, and while on Hulu, we strongly suggest to single out Brandt in Love, Victor as well.

The Valet is now available to watch on Hulu