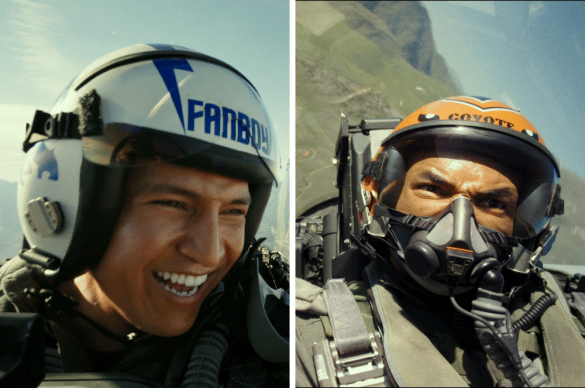 We were anxious for the chance to speak with two of the leads from perhaps the most popular movie of the year, Tom Cruise’s Top Gun: Maverick, and we finally received that opportunity one recent morning as Top Gun: Maverick‘s is gearing up for its home entertainment release. We advise you to watch this movie on the biggest possible screen, whether that is at home or in the theatre, as Top Gun: Maverick continues to play theatrically in packed cinemas. The two leads in question are Danny Ramirez, who in the Joseph Kosinski-directed film plays Lt. Mickey “Fanboy” Garcia, and Greg Tarzan Davis, who in the movie is Lt. Javy “Coyote” Machado, as both are mission candidates. As for commonalities between the pairing, as Ramirez’s movie Look Both Ways co-starring Lili Reinhart is now streaming on Netflix and Tarzan will continue to work with Cruise, being cast in the upcoming Mission: Impossible – Dead Reckoning Part One in a secret role, Ramirez pointed out that the two of them happen to come from a background in sports. This seems to be even more accurate as Ramirez was rocking a Miami Hurricanes football jersey on the junket day, and growing up in Miami, dreamed of competing in football and soccer. Tarzan actually went even further, as the New Orleans-born actor has a boxer father and was a running back in high school. Danny Ramirez describes that coming from a sports background, that the pair (and many of the performers in general) are “competitive but playful”, and we get the impression that the desire to succeed that most of the young pilots carry with them in Top Gun: Maverick carries over off screen as well. They also discussed pranks, as Tarzan is a notorious prankster, though Ramirez noted that Tarzan wasn’t able to catch him in a prank, though Tarzan certainly made attempts and perhaps will continue. Lastly, Tarzan explained that in the spirit of competitiveness, that their leader “Maverick”, Cruise himself, had never before played the game Heads Up!, but once he picked it up became extremely interested in winning the game at an off set location.

We will be your wingperson and definitely instruct you to watch our fun video interview with the pair here: