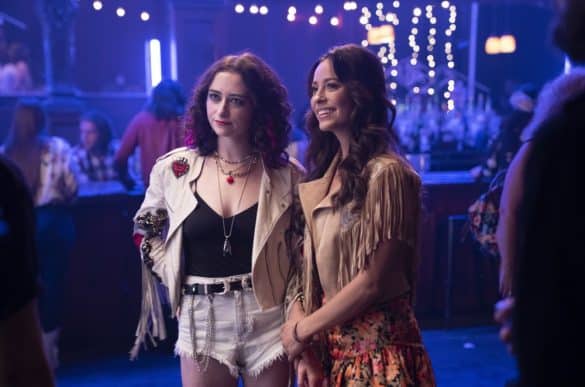 Torn Hearts is a real gem of a film, a collaboration between EPIX and Blumhouse Television that isn’t explicitly a horror movie. Instead, it is set in the Nashville country music scene and is a female-driven cautionary tale about stardom. Torn Hearts features some of our top screen performers in stars Katey Sagal, as a country music idol who might not be as wonderful as she appears from afar to the impressionable young duo of further faves Abby Quinn and Alexxis Lemire. In this layered film, Lemire plays Leigh, the lead singer and Quinn is Jordan, the songwriter in a band that is also called Torn Hearts, as is the film’s ominous title.

We sat down with the film’s star Lemire, for whom we had been looking to get the chance to speak for a number of years now. We finally got the opportunity for this particular film and boy, did Lemire bring the fire and in no way disappoint us, speaking from what we believe was the set of an upcoming film or series on which she was working. She first of all said wonderful things about co-star Abby Quinn, so much so that she described an all out blow out fight in the film between the pair as being incredibly difficult to shoot. As well, she went on to praise actor-turned-director Brea Grant and shared with us her love of female directors. Of course, this reminded us to bring up another film on which Lemire worked that we loved so much, the Alice Wu helmed feature The Half of It, which premiered at Tribeca and streamed on Netflix. We absolutely adored that film, too, and Lemire immediately name checked co-stars Leah Lewis and Daniel Diemer as those that she would love to work with again. Then Lemire threw a little bit of a curveball and said that as a half-Puerto Rican, she would love to collaborate on a future project with screen icon (and of course, a musician as well), multi-hyphenate Jennifer Lopez. Most of all, we implore you to watch Torn Hearts if you are a fan of music, Lemire, female-driven projects and Katey Sagal.