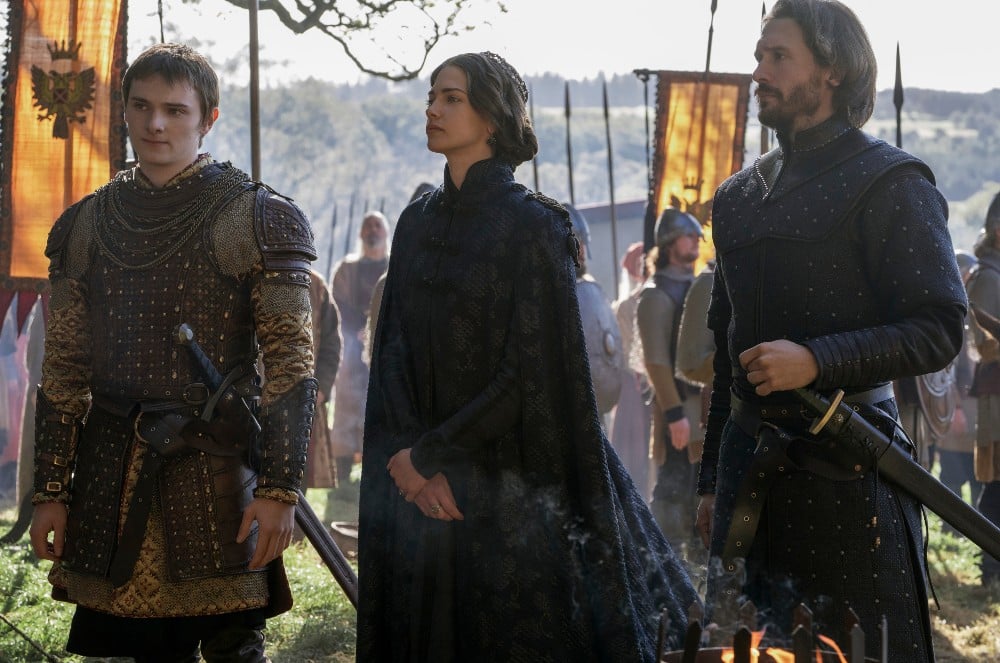 Mercurial David Oakes of Vikings: Valhalla capably plays Godwin, Earl of Wessex, a sort of morally questionable yet highly intelligent figure who nonetheless seems to always be manipulating the other characters or is tantalizingly close to the seat of power, (think of the character as a slightly closer to the action Petyr Baelish of Game of Thrones). Godwin holds much influence despite his not really having any experience in battle, aside from the horses that he frequently rides (and like his character, Oakes is an avid equestrian) and oh yeah, he sometimes kills people, as the actor notes cheekily. Of course, as Oakes has taken on a number of theatre roles that have pretty strong thematic similarity to Vikings: Valhalla, we had to ask if his experience in the West End premiere as Thomas in Venus in Fur, directed by Patrick Marber, as well as playing Hamlet in Shakespeare’s Rose Theatre had an impact on his portrayal of Godwin. Oakes had a really surprising answer, which seemed like it came directly from the Godwin playbook. In fact, for a while, we felt like on the junket for Vikings: Valhalla, that we might have found our way into the fractured world of Godwin himself, but Oakes possesses a dash of humility and might have let slip to Brief Take that there may be a second season of Vikings: Valhalla in the works, or already even filmed, we are not quite sure, as Godwin is a master of manipulation. One thing is for certain is that like Littlefinger, this is an underdog character, (one of the lone Saxons in a series that is primarily directed on the Vikings, hence its title), but nevertheless is one that continues to strive and tries to stay one step ahead of everyone around him. Watch our fun video interview with Vikings: Valhalla star David Oakes here:

Vikings: Valhalla season one is now streaming on Netflix