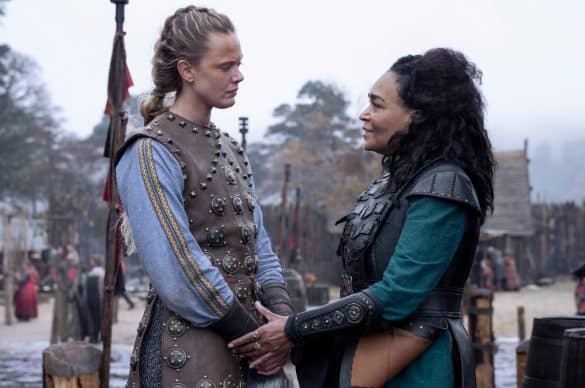 Peering at the epic and theatrical Netflix series Vikings: Valhalla from a distance, you may imagine that it would be something of a boys club, right? Well, not in this lifetime, not by a long shot. Freydis Eriksdottir and Jarl Harken are two of the strongest, most fully realized badass female characters from any recent show. Appropriately, Brief Take received the opportunity on the video junket for Vikings: Valhalla to sit down with Swede Frida Gustavsson and Danish-Swedish Caroline Henderson (who also happens to be a pop and jazz singer). What sets apart these female characters from a different medieval fantasy series is that the characters carry trauma (for Freydis, this involves being assaulted and scarred), but rather than living within the trauma, this pain instead manifests in a narrative that leads Gustavsson to not only endure but to thrive after being put to a warrior test in a female-written and directed episode of the stunning show. What makes this transformation believable is that Gustavsson was practically born to play the critical role of Freydis on Vikings: Valhalla. Gustavsson actually shares a remarkable number of traits with Freydis (her childhood nickname growing up), but also draws on her modelling background by how unlike a model the character acts, certainly standing and moving through the world that is absolutely reminiscent of a Viking (Greenlander, specifically). We also cannot say enough awesome things about the character of Jarl Haakon, (played by Caroline Henderson), who in the history books may have been male, but as the spiritual leader / executor / total badass, we think works way better as a female role, and Henderson is the perfect choice to play this role (and remarks humbly that a man could have played the role, but the action onscreen suggests otherwise). We notice this to be a common theme between the two, as Gustavsson downplays the emotions Freydis initially feels for Harald (Leo Suter), as the two embark in a passionate interaction at the start of the series in Kattegat. However, we suspect that this pairing has a chance to flourish, especially when the two become separated and Freydis departs to her own badass levelling up challenge in Uppsala. One thing that the series makes absolutely clear is that the women aren’t treated as an afterthought (Emma of Normandy is another richly layered example) and Vikings: Valhalla is a shining example of a series that places females warriors in the spotlight.

Vikings: Valhalla season one is now streaming on Netflix