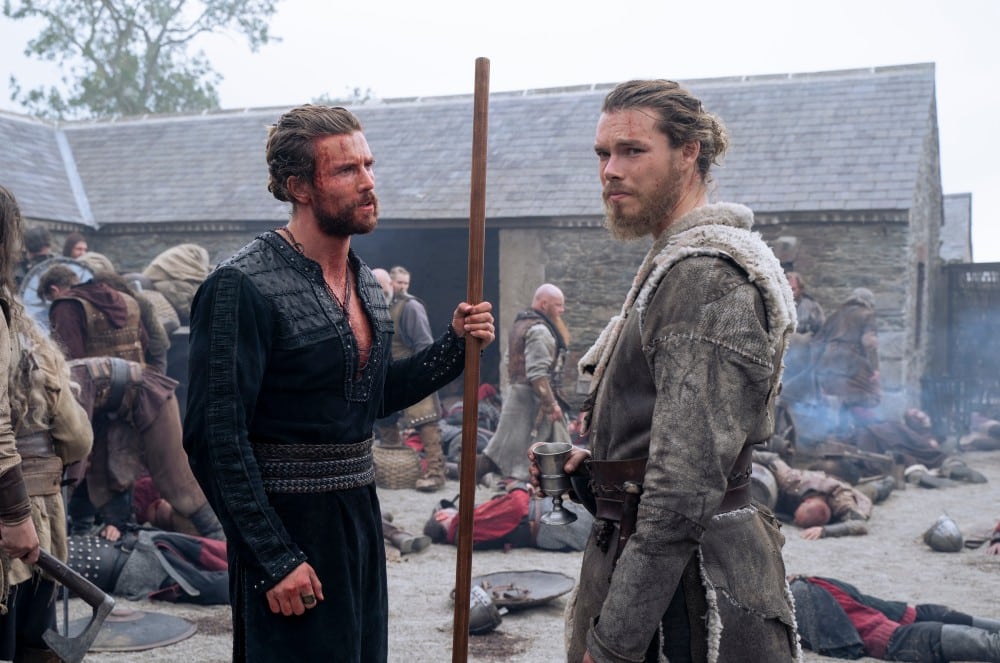 Let’s hear it for the boys! While it is probably extremely easy to categorize Vikings: Valhalla‘s Sam Corlett (Leif Erikson) and Leo Suter (Harald Hardrada) as pretty faces, (nice hair in buns and beards etc.) the truth of the matter is these two guys,  making up 66 per cent of showrunner Jeb Stuart’s self-described “Big 3” (see below for that in-depth video interview as well), genuinely bring it in the series. It would be extremely easy for Corlett, who was generally shirtless as Caliban throughout his work in Netflix’s Chilling Adventures of Sabrina, (one of our fave shows), to do this again in Vikings: Valhalla, (for the record, Leif does remove his top toward the end of the season, but to great dramatic effect), he spends much of the series in leather armour, vegan leather armour as it turns out, as the Australian actor has been vegan for four years now. And for Leo Suter, his abs and butt are on full display in several scenes in which he is quite intimate with Corlett’s character’s sister, fellow Greenlander Freydis, but again, this serves to move along the story, and these guys have put in the work (Suter described doing a lot of reading in preparation, including Beowulf, which is no easy feat). With the characters of Leif and Harald, according to Suter, we see the Vikings as more than legendary figures, and in the case of Harald, as he is one of the last of the berserkers, there is a sense of finality in the character. We also wonder if he is going to side with his half-brother Olaf (Jóhannes Jóhannesson), who definitely believes in the New Gods, while Harald attempts to play both sides a little, making new close friends in Leif and Freydis, the Pagan Greenlanders. Watch our introspective video interview with Sam Corlett and Leo Suter below:

Learn even more about Vikings: Valhalla in our video interview with showrunner/executive producer Jeb Stuart here:


Vikings: Valhalla season one is now streaming on Netflix