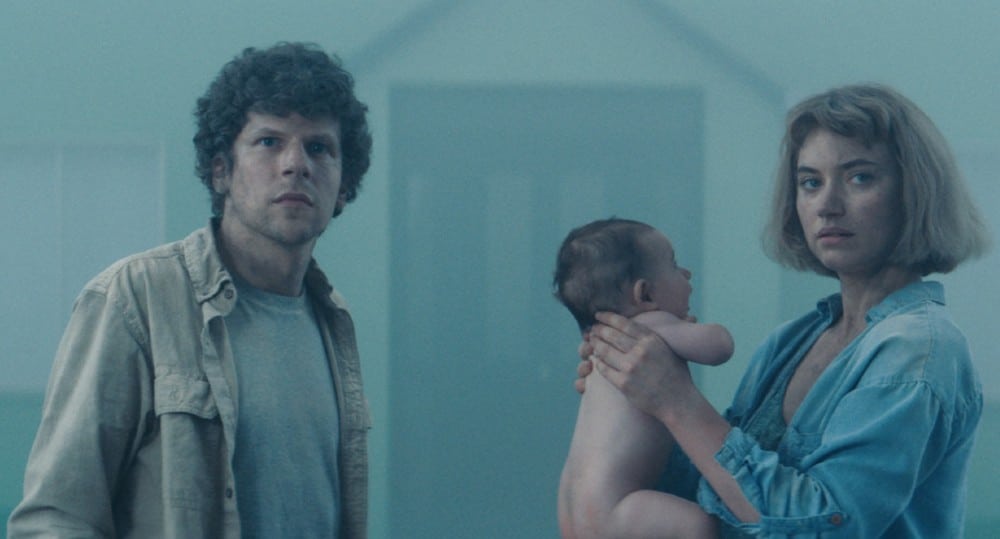 There’s no other way to say this: Vivarium, the new film from writer-director Lorcan Finnegan, would work better as a short—and only just barely. It’s true the feature, co-written by Garret Shanley, possesses a single-minded intensity and tone different from most films. There’s also Jesse Eisenberg and Imogen Poots lending their talents to its construction. But the point of the film is thin, and once it’s been made, there’s simply too much time left. Yes, despite even a 97-minute runtime.

Tom (Eisenberg) and Gemma (Poots) are a young couple looking to buy a house. They stop by a slightly askew real estate office staffed by a singular weirdo, Martin (Jonathan Aris), who brings them to the latest housing subdivision, Yonder. The place looks like a Sims outtake or a Windows 98 wallpaper, which is weird enough. But then Martin disappears and the couple is trapped. What follows is their slow descent—literally, as Tom later decides to dig an escape hole—as they discover the unreality of their situation. This includes inexplicable food drops and, in a bizarre flourish, the delivery of a baby with a simple edict: “raise this child and be released.” The couple sets to work, the baby growing quickly (into Senan Jennings and Eanna Hardwicke) while only approximating an actual human. In this, the film is unsettling to watch, even as it becomes increasingly obvious what’s going on. The couple’s lives split along normative gender divisions, the boy they’re meant to raise gets odder, and the film belabours its subject, unveiling rote secrets towards its end. This is the whole of Vivarium.

As something to be projected on the wall of an art gallery, for example, there’s a certain brazenness to Finnegan’s efforts in Vivarium. He has his visual concept, the film’s inherent logic, and some presumed mysteries—and off he goes. Much like the characters in the film though, stuck as they are in their suburban labyrinth, there’s no actual place of consequence at which to arrive. It’s all just a circle to nowhere.

Interview: One Day at a Time’s Isabella Gomez