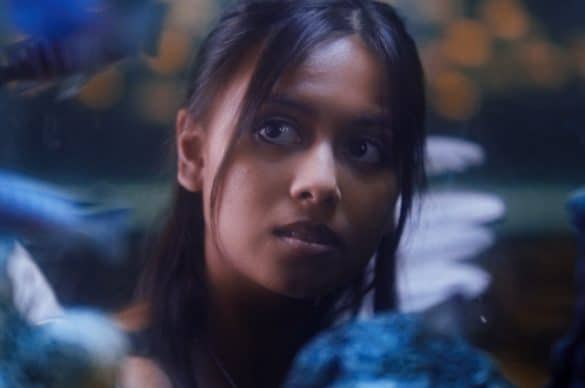 You’d be forgiven for thinking the opening of White Elephant, the debut feature from writer-director Andrew Chung, is a bit cheesy. That’s by design, visualizing as it does the dreams of its teen lead character, Pooja, which have in turn been filtered through the movies of the 90s—in this case, Baz Luhrmann’s Romeo + Juliet. Chung’s film ping-pongs through a few different emotions from there, never straying too far from its true tone, as reflected by that cinematic inspiration. After all, this is a teen movie, which means we’re in for a wide gamut of feelings.

Set somewhere in Scarborough and Markham, White Elephant follows Pooja (Zaarin Bushra) as she navigates the casual cruelty of high school, her crush on a white boy named Trevor (Jesse Nasmith), and the daily pressure from her father (Kumar Kapasi). While Chung’s film runs only an hour, there’s much to get through given the constant ups and downs of teenage life. That aforementioned crush, for example, sets Pooja in conflict with her friends Manpreet (Gurleen Singh) and Amit (Dulmika Hapuarachchi), who are dealing with their own insecurities, and draws some other unwanted attention too. In this, the film perhaps escalates things too far, yet it also captures the boredom of young suburban life—without itself becoming boring. And while the film’s story is not particularly novel, its racial component—which the characters are very aware of, and which adds another dimension to the narrative—drives us to explore some new territory. Worry not though, to anchor our Canadian sense of place, some of that ground includes hanging around a Tim Hortons coffee shop.

Credit to Chung here, White Elephant works well enough with limited resources and many first-time actors—including his lead, Bushra. For her part, she capably plays off the internal and external forces working in and on her character. It’s hard not to root for Pooja in her quest to find herself, even while rolling our eyes at some of her mistakes and attendant hysterics. We can still remember being that age too.