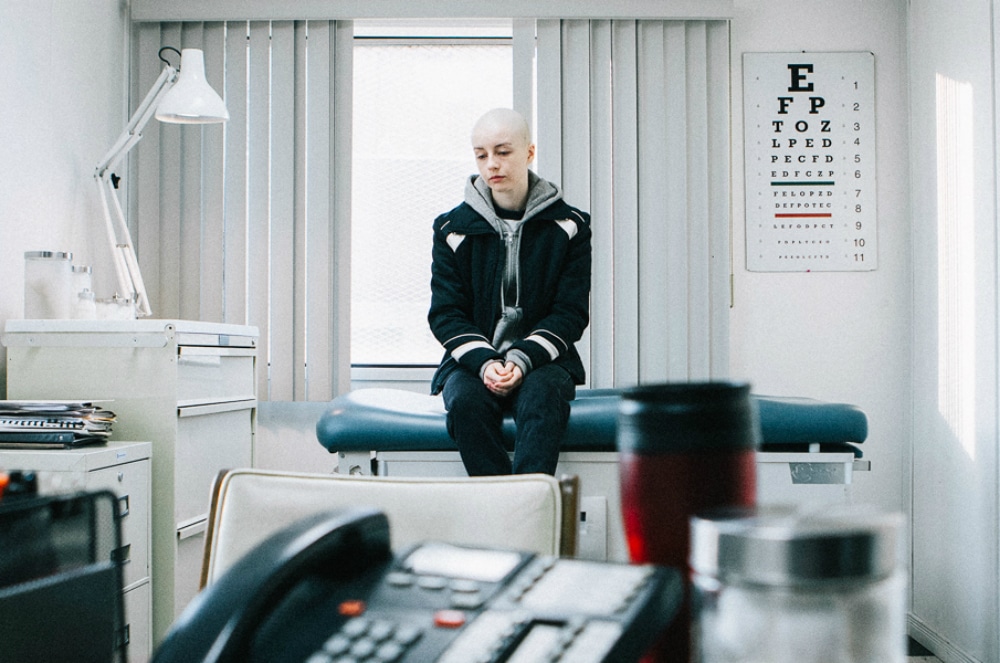 It lacks the same insane manic energy (most films do), but if you squint at Calvin Thomas and Yonah Lewis’ White Lie it’s possible to see a sliver of the 2017 classic Good Time. I say this as the highest of high compliments. Both films are built around the absolutely absurd lengths their protagonists will go to secure their future, even in the shortest of terms. Where White Lie differs is in its approach, a not ineffective one.

With a dispassionate eye, we regard Katie as she shaves her head in preparation for another day at school spent fundraising to help her beat cancer. Immediately, we understand the con. No one in her world, save confidant Owen (Connor Jessup) knows the deal—not her dancer troupe friends, nor her university’s administration, and definitely not her girlfriend Jennifer (Amber Anderson). To keep her subterfuge going, Katie is forced to expand her inner circle and face down people like her estranged father (Martin Donovan) and others. In watching White Lie we’re pushed to identify with Katie’s struggles—why can’t she just get what she wants?—even as we’re repulsed by her actions. It’s all a tad ridiculous, and yet… not.

Thomas and Lewis maintain their cool approach, slowly tweaking the pressures exerted on Katie to see if she’ll break. We hang in suspense too wondering if she will indeed get away with everything. While White Lie isn’t quite as captivating as, yes, the Safdie brothers’ masterpiece, it is a harrowing experience in its own way. And to its credit: it ultimately becomes difficult to resist.