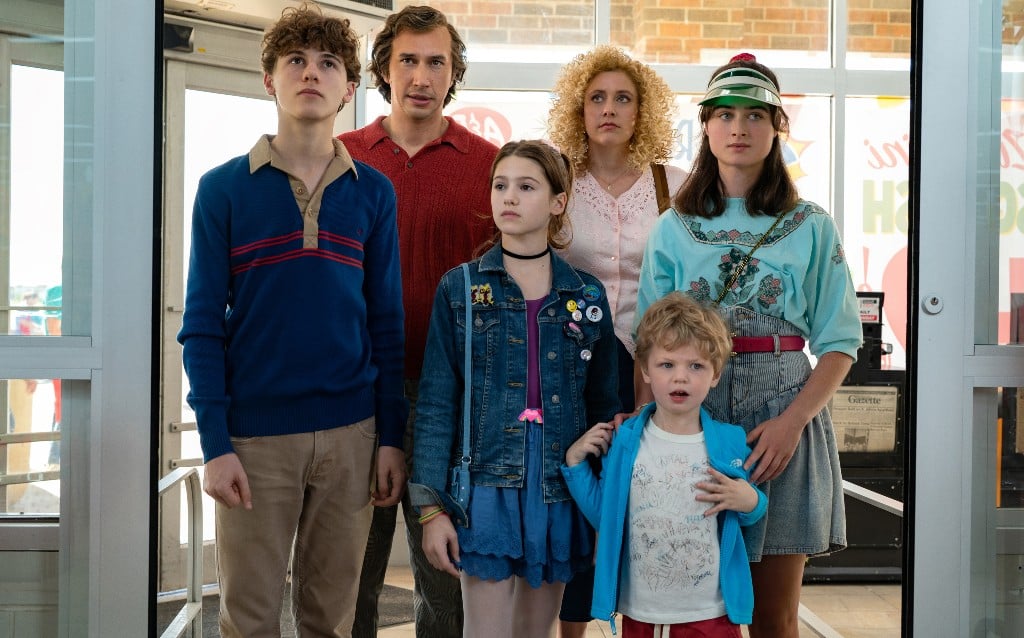 Writer-director Noah Baumbach’s film adaptation of White Noise is an annoying and tedious mess. Full disclosure: I’ve not read the Don DeLillo novel on which the film is based, so it’s possible the book is the same. But given DeLillo’s standing in literary circles and his work’s stand against time, making it “worthy” for cinematic interpretation now 25 years on, I can only conclude the problem lies solely with the film.

As its subject, White Noise centres on the Gladney family. The father, Jack (Adam Driver), teaches Hitler Studies at the nearby college; his wife Babbette (Greta Gerwig) leads aerobics classes for seniors; meanwhile, their four kids (mostly from different marriages) alternate between preternatural intelligence and being, well, kids. The film divides up the action into three parts, first capturing the dynamics of the family’s home and work lives, then blowing that up after a darkly absurd “Airborne Toxic Event”, followed by a stranger still “return to normal” and a quasi-drug-fueled descent into violence. The supermarket is also prominently involved, as are other talented actors (including Don Cheadle, Jodie Turner-Smith, and freakin’ André 3000). Maybe the point of all this is clearer in the novel, or maybe—to rely on a tired cliché in the presence of DeLillo—Baumbach has just bitten off way more than he can chew. His film has all sorts of fun period production details, and everyone seems to be on the same wavelength, approaching the source material with earnestness. Yet long stretches of the film feel far from profound, or even funny—in fact, they play like lame reimaginings of a Leslie Nielson spoof or tired episodes of The Simpsons.

My basic understanding of DeLillo (I’ve only read Underworld) is that his novels are dense and complicated; in other words, his books only really work as books, making a straight adaptation difficult. Regardless, Baumbach can now take a risk like this, particularly with Netflix throwing money at “prestige” projects, but it hardly seems worth it. Ultimately, for a film so preoccupied with death, this one is DOA.