While Outlander season five is being filmed, catch up on #TheFrasers and #TheMackenzies with this #giveaway.

For bonus entries, fill out this Brief form: 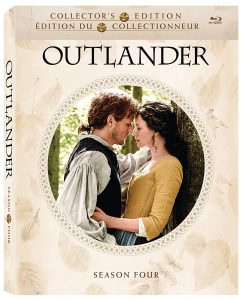 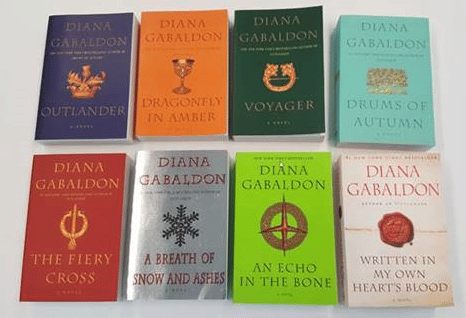 Brief Description: Finally reunited, Claire and Jamie’s epic time-traveling love story continues when OUTLANDER: SEASON FOUR debuts May 28 on Blu-ray™, DVD and Limited Collector’s Edition Blu-ray, from Sony Pictures Home Entertainment Canada. Based upon Drums of Autumn, the fourth of eight books in Diana Gabaldon’s international best-selling Outlander literary series, OUTLANDER: SEASON FOUR sees Claire (Caitriona Balfe in her Golden Globe®-nominated role) and Jamie (Sam Heughan) trying to make a home for themselves in Colonial America on the cusp of the American Revolution after being shipwrecked on their way back to Scotland.

OUTLANDER: SEASON FOUR contains all 13 episodes in five-disc Blu-ray, DVD and Limited Collector’s Edition Blu-ray sets, along with four additional “Outlander Untold” scenes, gag reel and three featurettes. “Outlander Untold” features four all-new scenes allowing viewers to dive deeper into Lord John Grey’s life as a single father to William, Murtagh and Marsali navigating a confrontation with deceitful landlords; Young Ian meeting Rollo for the first time; and Aunt Jocasta teaching Phaedre & Lizzie a valuable lesson about working together. In “Here in the New World,” the cast and crew take a look at the new cultures, costumes, social rituals and homes this season; Caitriona and Sam along with the cast and crew reflect on their favourite moments from the last four seasons in “Nothing is Lost: A Look Back;” and “Training Rollo” has John Bell and Animal Wrangler David Stewart taking viewers through some of the training they did with Rollo, the wolf.

The Limited Collector’s Edition and Blu-ray™ will feature nine deleted and extended scenes with introductions by Executive Producer Ronald D. Moore, episode commentaries from Moore and Executive Producers Maril Davis, Toni Graphia and Matthew B. Roberts among others, and two additional featurettes. In “Outlander Untold: Through the Stones,” take a look at the making of the four Outlander Untold additional scenes with on-set interviews from the cast and crew. “People of Worth: The Frasers” highlights the loving relationship between Claire & Jamie, Brianna & Roger’s challenges this season and a look at what family means to the extended Fraser clan.  In addition, the Limited Collector’s Edition Blu-ray will feature special packaging, an excerpt from the ninth book in Diana Gabaldon’s Outlander series and early access to the Season Four soundtrack.

*Contest is open to Canadian residents only. However, you *must* be following Brief Take on Facebook, Twitter and/or Instagram in order to be eligible. We will be checking. Thanks for all of your support of Brief Take!*

For more of our OUTLANDER: SEASON FOUR coverage, read our interviews with Sophie Skelton and Tim Downie!