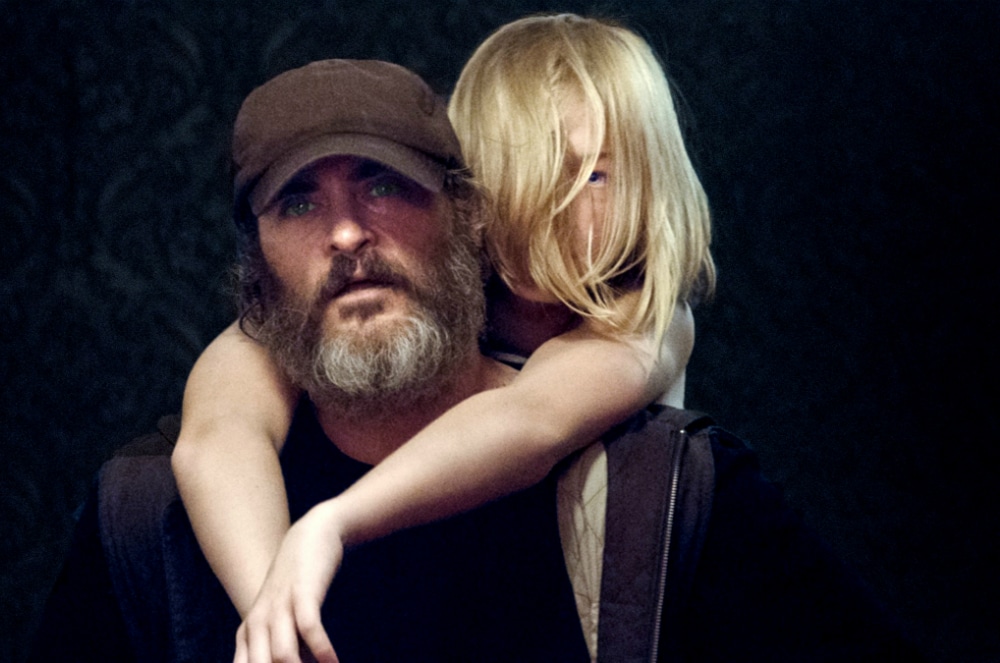 Joe wants to die. That’s apparent from frame one of writer-director Lynne Ramsay’s masterful new film You Were Never Really Here. It opens on Joaquin Phoenix as Joe with a plastic bag over his head, a cacophonous soundtrack announcing his inner turmoil—the sentiment is obvious. Then there’s Joe’s chosen profession: he rescues young girls in danger, and meets their captors head on, often attacking them with a ball peen hammer. It takes a certain mind state to do such things, and Ramsay is one of the few who could express its interior so effectively to us.

His body seemingly assembled from disparate parts, Phoenix lumbers through You Were Never Really Here with barely contained fury. His Joe lives in New York City, where he tends to his aged mother (Judith Roberts), and handles business. Phoenix plays him as a man haunted by trauma only he can see. After a brief (and obliquely bloody) sojourn to Cincinnati, Joe’s handler John (John Doman) gives him a new mission: rescue Nina (Ekaterina Samsonov), the daughter of State Senator Albert Votto (Alex Manette). In her blonde purity, Joe sees innocence personified, and the grip on his newest hammer tightens. But past the grizzly violence in the film, implied or otherwise, is pure cinema. Ramsay has put to use every tool in her toolbox to set this film in motion, and barrel it towards a satisfying conclusion. That means taut, incisive editing, the application of a terrifying score from (who else?) Jonny Greenwood, and shaping a performance from Phoenix that consistently surprises and underlines the film’s themes.

Ramsay has a simple story on her hands, with themes of vengeance and pain, of shady power and the will to use it, and the small pieces of gristle who fight back against—or cope with—the spinning wheel of the world’s meat grinder. Or it’s just a man, a girl, and a hammer. That You Were Never Really Here can find meaning in the small gestures of its characters, in brief images of horror, in the seemingly endless, almost habitual, violence, is to its credit. That it somehow lands on a note of, if not hope, then maybe the mere potential for a brighter day, is almost startling. It’s shocking in a way Joe’s death wish isn’t. Because, sure, we know trauma begets more trauma, but perhaps it can forge peace too.