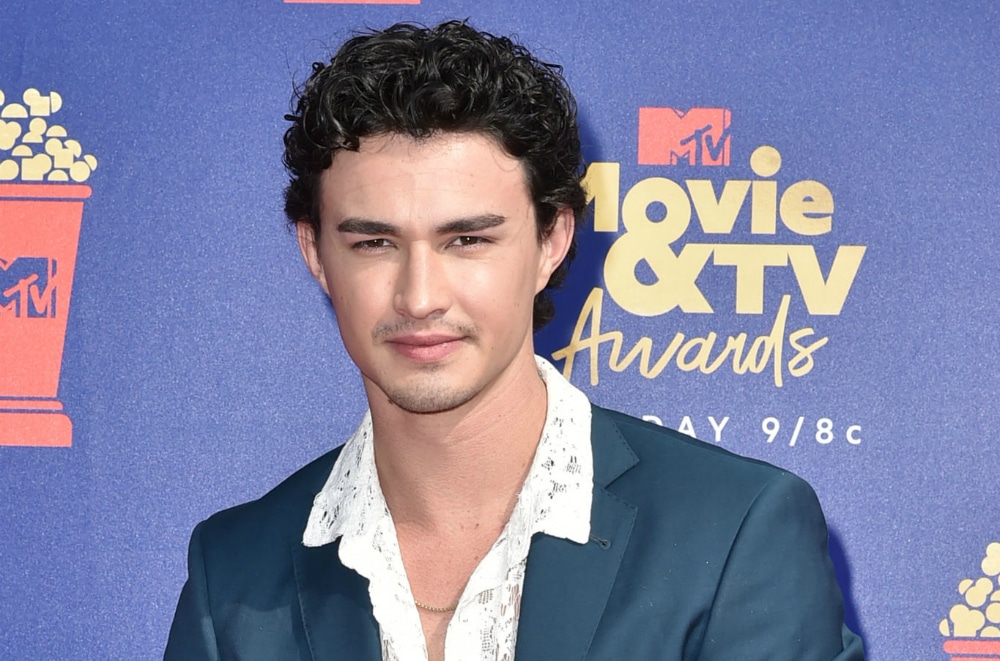 We would happily take a trip into Hell if it means getting the chance to speak with the rugged Gavin Leatherwood, who plays the warlock Nick Scratch in The Chilling Adventures of Sabrina. Luckily, this endeavour did not require a visit to the underworld, instead only about 100 back and forth emails, and the opportunity finally arrived to chat with Brief Take directly after he appeared on BUILD Series in New York.

There were a bevy of questions that we wanted to ask Leatherwood about the series, and the handsome down-to-earth (in real life at least) Leatherwood was up for answering almost anything (but you’re going to have to wait for Part 4 of the show to see whether #Nabrina reunite).

The following is a condensed and edited version of a hellacious interview with the talented Gavin Leatherwood of CaOS.

Brief Take: How did you go about crafting the trauma for Nick Scratch this season?

Gavin Leatherwood: It’s helpful getting into the make-up for all that and then lying around like a tortured piece of flesh. That first [laughs] beginning bit, being all golden and I also had a fever on set that day. It was quite an aggressive fever, so that was really helpful for getting into character. [laughs] But jokes aside, I really looked at what Nick was going through and tried to empathize with who he was and what was happening to him, and to imagine and visualize what it would be like to be in Hell and to be in a never-ending time loop of being physically dominated and wrestled by someone of giant stature and strength. So I allowed the imagination to go to those places and feel out that trauma.

BT: On that note, how was shooting the wrestling scenes with Luke Cook?

GL: Yeah, man. It was such a different kind of exhausting day. It wasn’t a very wordy scene or anything, but it was just so physically demanding, right? I mean we had a rehearsal for those wrestling moves, which is great, because we got to figure out how our bodies moved and worked together, but [chuckles] just to be tossed around all day on this mat was…it reminded me of wrestling when I was in high school and I wrestled. [laughs] But man, it was a physically exhausting day. I definitely had a massage and took a hot bath after that one. 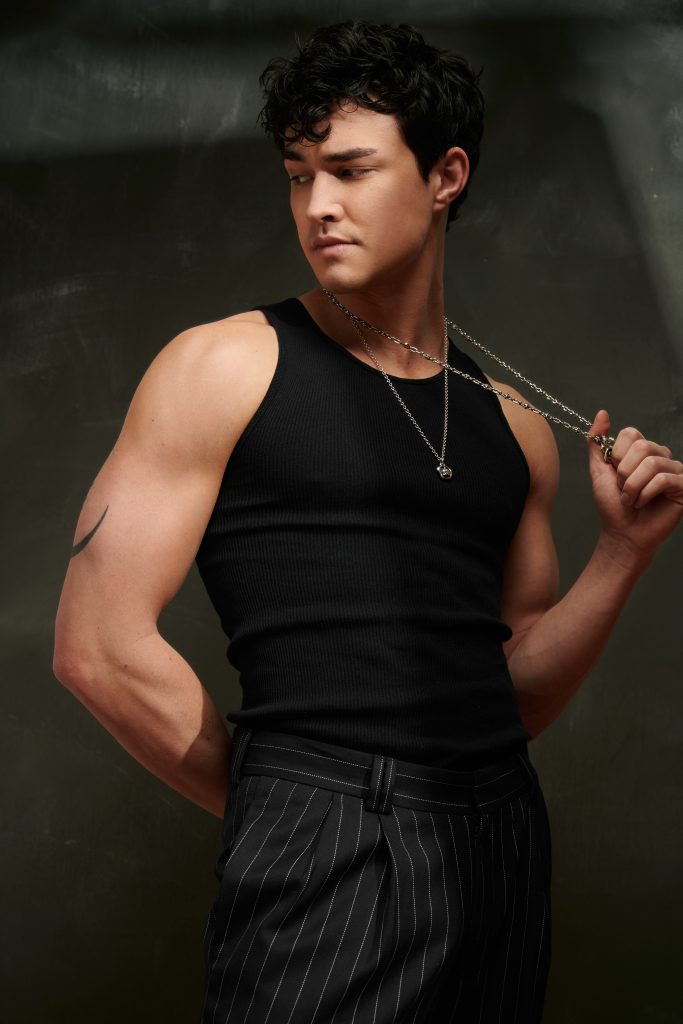 BT: What do you like most about working with Kiernan Shipka?

GL: Oh my gosh! She’s such a…she’s 20, but she sets such a precedent for everyone on set. You know, I think the number one of the show sort of always carries that responsibility to some degree, and I’ve learned so much from being in a professional environment with her and seeing how she operates and how she always has this sort of even keel, Zen vibe about anything that sort of comes her way. And I mean she works quite hard, she works crazy hours and is there much more often than anyone else, and she takes everything with a smile and is happy to do it. She just really busts her ass and it’s admirable to see that in anyone, but especially in your number one.

BT: What has been your all-time favourite scene to shoot on the show?

GL: Oh man. I really loved filming at the carnival. We had big groups of people there and there were so many people in these fantastic costumes and make-up and it sort of felt like we were at a carnival for a bit, because that Ferris wheel worked, that merry-go-round worked, it was all of my favourite people on set—we had all the aunts, all the kids. I really love those filming days because we all got to get together and hang out is what it felt like.

BT: What about the aesthetic of the show and perhaps the scenes in which you aren’t featured?

GL: I love the musical numbers in this part. I wasn’t in very many of them, so when I got to see them on screen, it was like: “Oh, that’s what they’re all doing that day”. You know, I watched a couple of things behind the scenes and it’s sort of fun to see that in contrast with this really dark witchy world. And I gotta admit, I love the days in which we have the gory bits and the prosthetics and all the practical effects are really fun and I feel like they do a great job of bringing a lot of them to life.

BT: Do you find it difficult keeping a straight face acting in scenes with Lucy Davis and Miranda Otto?

GL: [Laughs] Yeah, I think that there’s no getting around that. I mean I’ve come to adore both of them. I think that in Part 1, the kids were the kids and then the adults were the adults and that was early on, and even all the kids were figuring each other out and whatnot and hanging out, but over the past year, this past year,  I feel like we have all become even more close and tight-knit. Lucy is always good for a laugh and Miranda is right there with her—they’re just completely different energies. Lucy could be on a sitcom in a second, like her life and everything about her feels very out loud, and then Miranda’s got this sort of quiet, reserved sense of humour that’s just powerful when it comes out. They’re both lovely humans. 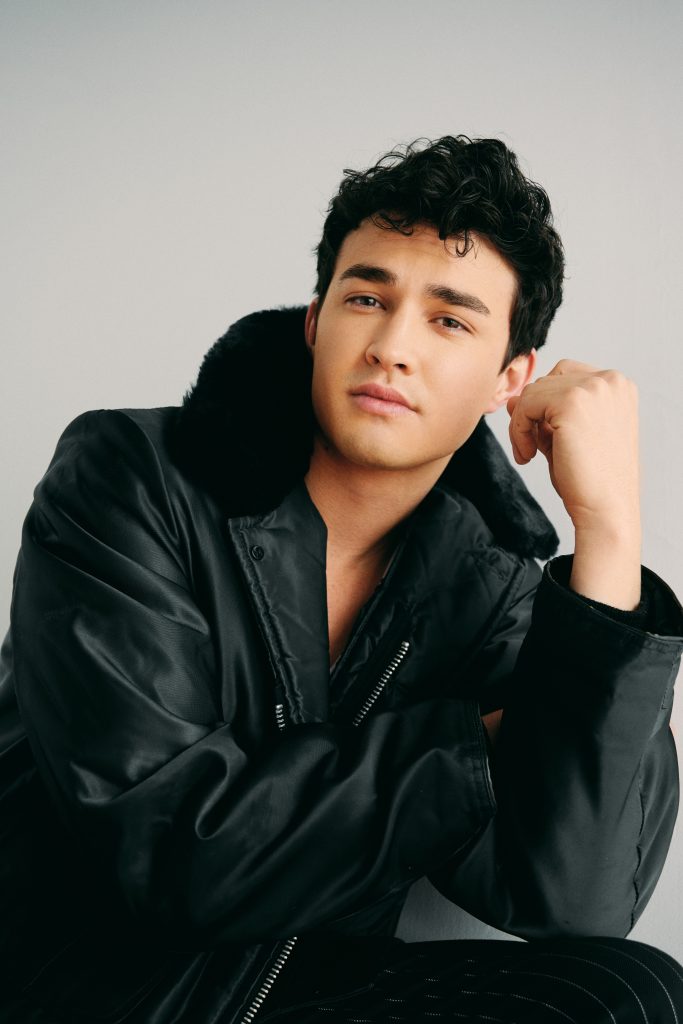 BT: Can you tell me about your bromance with Ross Lynch? I think I saw a video of the two of you playing piano together?

GL: Yeah, we [laughs] I think that my buddy Sam just took a video of us a couple of weeks ago and yeah, we’re both just jammin’ on the piano.

BT: When are there going to be more scenes with Nick and Caliban? That bannister vid was incredible!

GL: Dude, I know. I was just feelin’ the same way. I was like: “Man, I would really love some…” We have this really cool scene, without spoiling anything, we have this really cool scene together in Part 4 and they ended up having to cut it. When we both saw the scene, we were so excited to have the opportunity to play together, and then when they cut it, it was a little heartbreaking. But it’s okay, there will be other opportunities, I’m sure.

BT: With which actor would you like to have more scenes?

GL: Um, Richard Coyle, for sure. I love doing scenes opposite him. I’ve only had a couple, but watching him work is just really fun, and I feel like we got really lucky with all these really strong actors to look up to. I mean Michelle (Gomez), Miranda (Otto), Lucy (Davis) and Richard, they’re all so well-trained and they’re just a master class to be able to watch them [laughs], so it’s really fun. And I really just love Richard’s energy and I think that there’s a lot that I can learn from that guy. He’s incredibly talented. 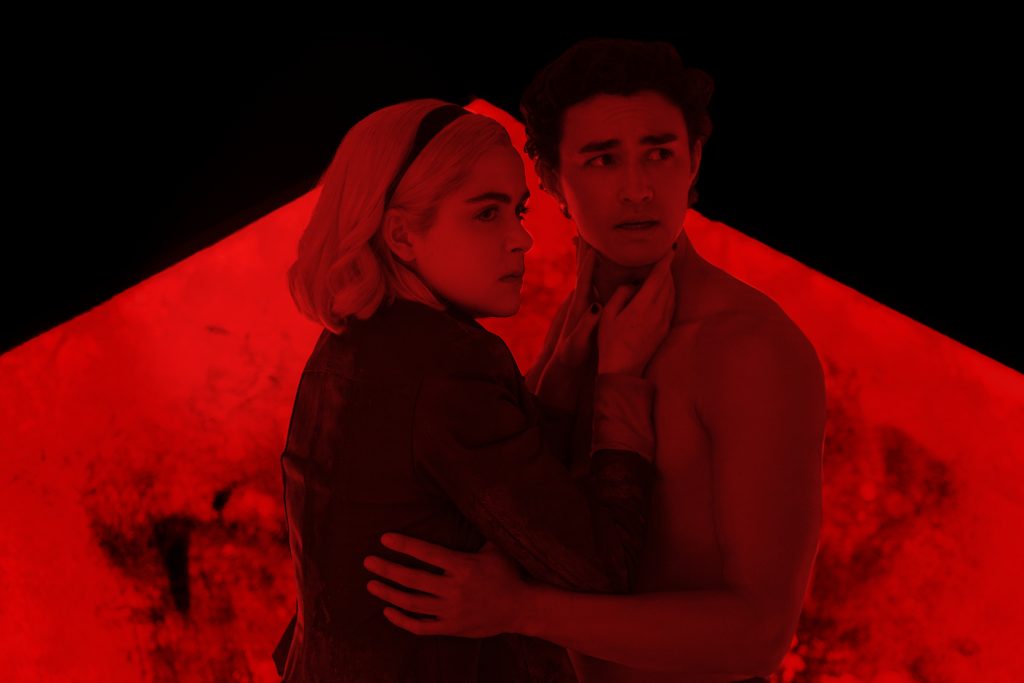 GL: You know, Roberto’s an enigma, man.  He’s this man that works so hard, that’s something that I think that Kiernan and him have in common, their insane work ethic. I mean he’s got multiple shows happening and several projects that he’s always working on and he pops in on table reads and will come around for those special days which are really fun for all of us to get a chance to read an episode out loud together, and it’s really fun, we usually have some fun news to report. He’s quite childish in a good way, like he’s very in touch with his inner child and eccentric and I love him for it.

BT: What is your go-to karaoke song?

BT: The casts of I Am Not Okay With This and Locke & Key are all into your show. Have you heard about any other surprising fans of CAoS?

GL: Um, awhile ago, I had a friend tell me: “You know, Frank Ocean follows you on Instagram”, and that was kind of like a…I didn’t realize that, like he’s watching the show, I don’t know how he found interest or what. But it was just kind of crazy to think of how much of a reach that the show has because we’re all just doing our job and shooting up in Vancouver and then it just kind of dawns on you at one point that you know, people watch this! [laughs] We’re not just making home videos for Mom and Dad at home, this is like something that is viewed by a lot of people. It’s pretty mind-blowing, man. 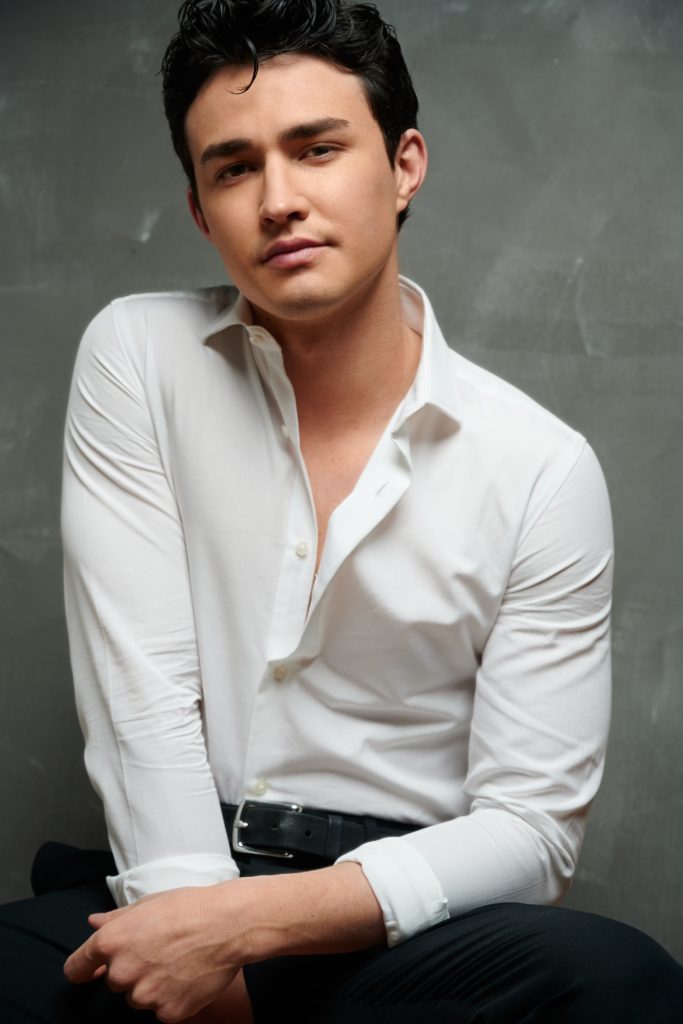 GL: I just finished Sex Education, which is great. I loved watching that show. I try to find films on there as well. I’ve been watching a bit of this show in preparation for [laughs] press and whatnot as well. I enjoy watching all of my co-workers doing their thing. [laughs] But yeah, Sex Education is really great. I really want to see I Am Not Okay With This, I’ve heard good things. I think Lachlan [Watson] went to the premiere as well. I loved Marriage Story, I’ve been going back and watching as well like some the site screeners that I’ve been missing, You, I watched You, Big Mouth is frickin’ hysterical. Yeah, I really, really enjoy Sex Education.

BT: What are you able to say about Part 4 of Chilling Adventures of Sabrina?

GL: Ah man! [sighs] At the very end of Part 3, we see (Father) Blackwood release The Eldritch Terrors. And if we’ve seen anything threatening so far on the show, the threats that are coming are much more shrouded in mystery and [pauses] of the cerebral nature and they are quite fascinating to explore. I’m excited for everybody to see what those terrors look like on screen.

BT: Is there a chance #Nabrina could get back together? 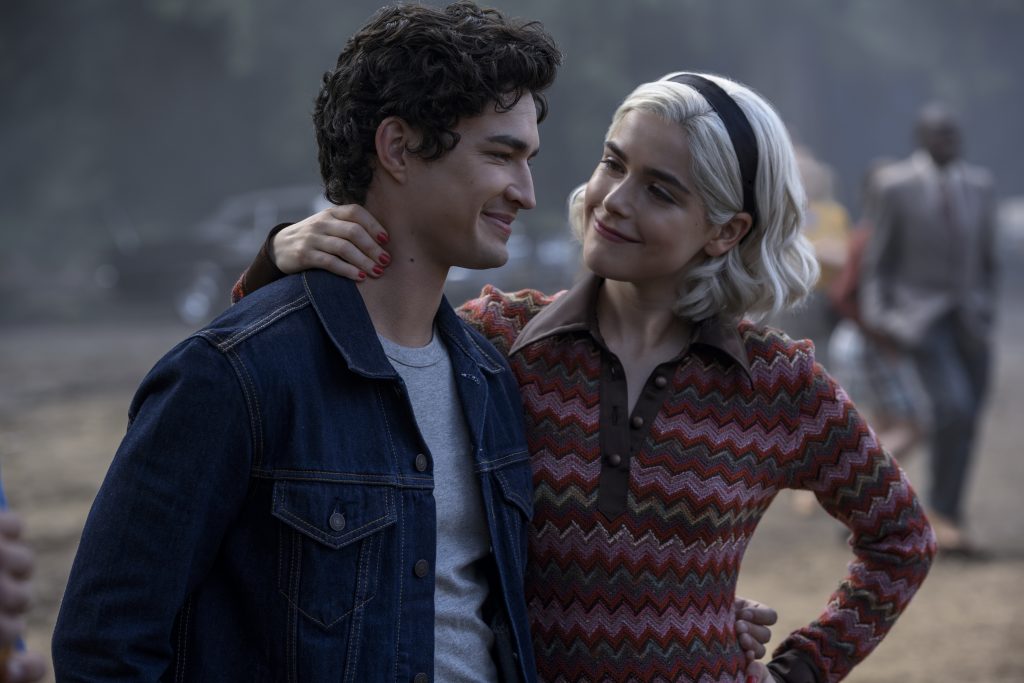 BT: What have you enjoyed about the fan reactions to the show and to you?

GL: You know, when Kiernan and I went to Argentina to do that convention, it was a really mind-blowing experience to see how much adoration and admiration and how much passion there was in the fandom. Like I said earlier, we’re making the show, we’re shooting in Vancouver, we don’t really give too much thought to that, at least personally, I try to do the best work that I can do with the job at hand. And then when something like that happens, it is shocking to see how much love there is surrounding the show and how fans are reacting to it. It’s really heart-warming and mind-blowing, all at the same time.

Chilling Adventures of Sabrina is now streaming on Netflix