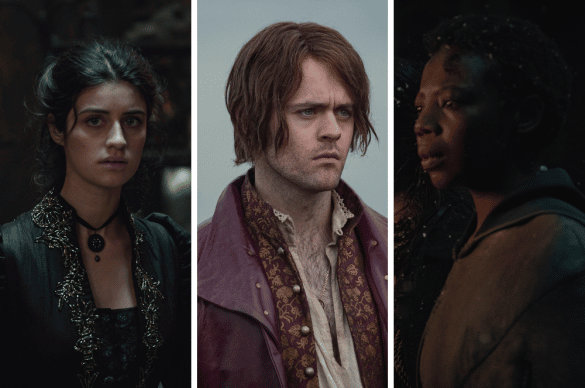 Toss a coin to your Witcher and check out Brief Take‘s video interviews with some of the hottest breakout stars in the entire planet. Currently established as the #1 streaming property on Netflix (season one was trending in the Top 10 in anticipation of the long-awaited season two even), The Witcher is bustling with scene stealers. Start with the musically inclined (with the opening song reference in season one and a more slamming track even in season two), by the multitalented Joey Batey, who plays Jaskier, a travelling bard who accompanies Henry Cavill’s Geralt of Rivia. As well, perhaps the most intriguing talent to emerge from the series is Anya Chalotra, who plays quarter-elf summoner Yennefer of Vengerberg. Chalotra is making huge strides in the industry and her character is incredibly popular with the fans of the series. Our junket day tripling also featured British-Zimbabwean actress Mimî M. Khayisa, portrayer of Fringilla Vigo, a powerful sorceress that trained alongside Yennefer. All of these performers (Chalotra and Batey together in a room and Khayisa on a screen alongside) made a tremendous impression, both on the show and in real life, and we were thrilled to sit down with the talented three to give us a preview of what is to come in the bold new season of The Witcher.

The Witcher season 2 is now streaming on Netflix