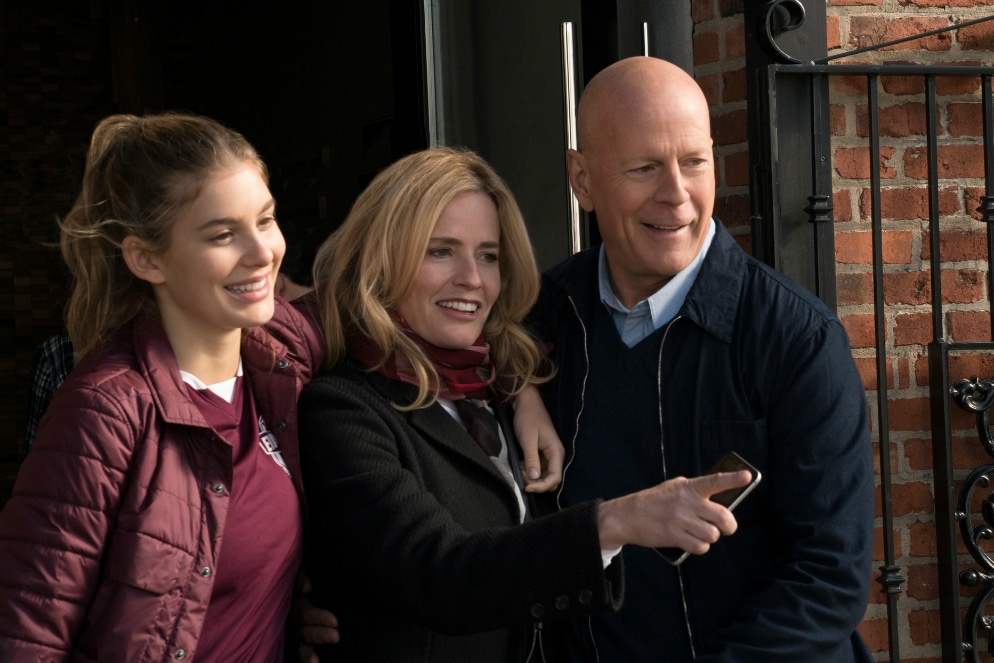 With much fanfare, Eli Roth’s reimagining of Death Wish screened and it was…sort of okay? There is definitely much to like from Roth, who is a skilled and intelligent filmmaker and surrounds himself with top people. It was a good looking and good sounding film, and weaved Chicago and Montreal into an interesting mishmash (the book is set in NYC and the setting here is Chicago). But the message of the film seems to be dated, and I wasn’t quite sure about the subtext (or the metatext, for that matter). Eli Roth should either go full-on genre, back to his splatter horror roots, or perhaps play it safe and present a pure, visceral experience that’s not reliant on blood and gore and offer a deep experience. Because again, Death Wish is fine, but it’s either a thriller that doesn’t provide nearly enough thrills, or a horror movie that isn’t quite horrific enough.

This movie should have been called old, white, bald guys. Bruce Willis is Dr. Paul Kersey, and as a 62-year-old, (referenced as “late thirties” jokingly in the film), he provides a surprising amount of action (but no way is he an emergency room doctor). Vincent D’Onofrio does have hair in the film as his wayward brother, but his role as Kingpin qualifies him. Dean Norris plays, surprise! the cop (it’s essentially a reprise of Breaking Bad‘s Hank). They are interesting, Elizabeth Shue is welcome, even Wendy Crewson and Tiio Horn in supporting roles are great. Argentinian newcomer Camila Morrone is fine as daughter Jordan, but the character acts differently than most teenagers, attached to her father (and mother), and with one friend, Sophie.

Basically if an audience member suspends all disbelief, the story becomes quite fascinating, though if Roth is making an overall point or just bringing up questions and starting debate is up to us. It seems like the latter as Roth clearly has a vision in mind (more house horror, like his previous vehicle Knock, Knock), along with the struggles of a middle-upper class white dude. It’s troubling at times and, while maybe a beat too long, is generally pretty entertaining and ultimately forgotten about fairly quickly.