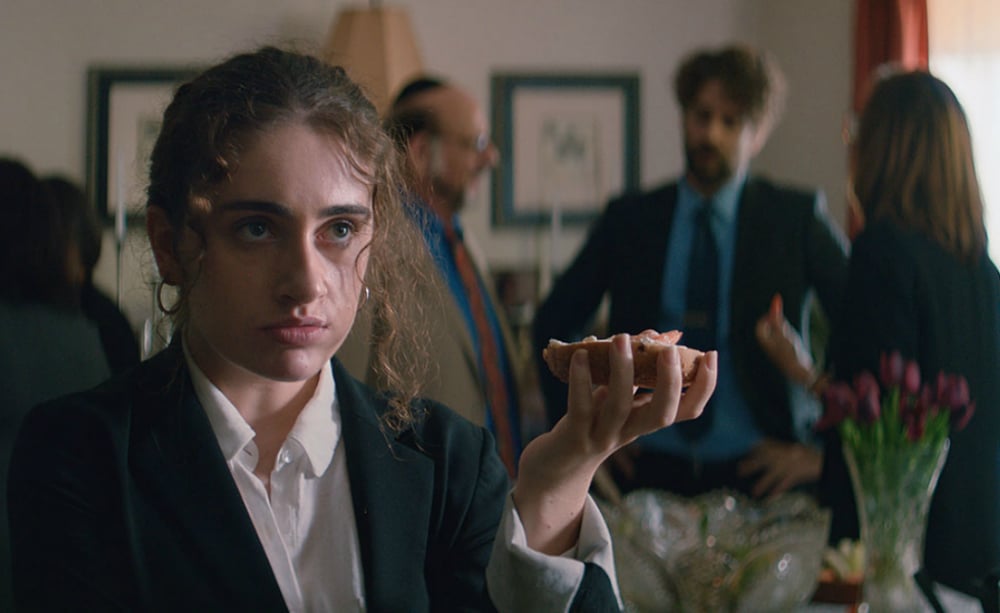 The sounds of a crying baby in Shiva Baby, the debut feature from writer-director Emma Seligman, almost come as a relief. Unlike the stress everywhere else in the film, here’s a problem with some obvious short-term solutions (feed, burp, change, etc.). For Danielle (Rachel Sennott), however, the baby is just another element of the cacophony and chaos that is her life—and there does not appear to be a resolution forthcoming.

If you can believe this, that’s actually the appeal of Shiva Baby, in which we join Danielle and her family as they spend the day sitting shiva in… wait, who died again? As drawn from Seligman’s short film of the same title, that’s the general tone, one of anxiety and confusion. Sennott’s Danielle is a young woman arriving at the end of her college years and trying to figure out what to do next. In the New York Jewish community of which she is a part, this tends to come with a lot of questions, her situation not helped by parents Joel (Fred Melamed, delightful) and Debbie (Polly Draper), who infantilize and interrogate her in equal measure. There’s also that baby, whose father, Max (Danny Deferrari), is too well-known to Danielle, and childhood friend Maya (Molly Gordon), who may be more than that. All of these complications (and more!) come crashing together, led by Seligman’s handheld close-up aesthetic and a horror movie score that underlines the tension. Sennott, meanwhile, navigates this claustrophobia with a well-tuned sense of both comedy and pathos. We’re willing to grin and bear it along with her.

While Shiva Baby isn’t exactly laugh-out-loud funny, it has enough humourous and recognizable moments for a wide range of audiences. The film’s cultural and gender context is significant, but it’s also an effective story of a young person trying desperately to sort themselves out in this bewildering day and age. Like the best coming-of-age films, even when not speaking directly to all, there’s still something there for everyone. You just need to hang on until to the end.

Shiva Baby is exclusively available this Friday at digital TIFF Bell Lightbox and in select theatres & VOD on April 2nd, 2021